The level of sloth, laziness and apathy that we are witnessing in this country is absolutely mind-numbing.  Of course this is not true of everyone.  There are still many Americans that are extremely hard-working.  But overall, it really appears that people are not taking as much pride in their work as they once did.  Some of the examples that I am about to show you are quite funny.  Others are more than just a little bit disturbing.  But they all have a common theme.  Americans from all walks of life are simply giving up.  Whether they are teachers, delivery people or fast food workers, the truth is that there are a whole lot of people out there that seem to have mentally checked out.

For example, take a close look at the midterm exam posted below.  Does anything stand out to you?… 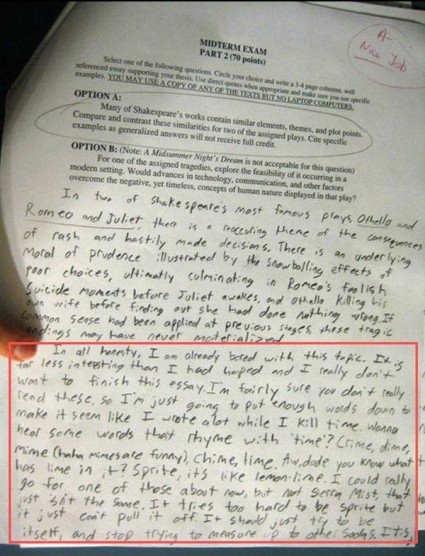 If you can’t read the writing in the red box, this is what it says…

“In all honesty, I am already bored with this topic. It is far less interesting than I had hoped and I really don’t want to finish this essay. I’m fairly sure you don’t really read these so I’m just going to put enough words down to make it seem like I wrote a lot while I kill time. Wanna hear some words that rhyme with time? Crime, dime, mime, (haha mimes are funny), chime, lime. Aw dude you know what has lime in it? Sprite, it like lemon lime. I could really go for one of those about now, but not sierra mist, that just isn’t the same. It tries too hard to be sprite but it just can’t pull it off. It should just try to be itself and stop trying to measure up to other sodas.”

To be fair, there is a tremendous amount of debate about this photo on the Internet.  Some people insist that no teacher would ever be so careless and that this picture must have been photoshopped.  Others that have studied this photo insist that there is no sign of alteration and that it is 100% authentic.

I will let you come to your own conclusion.

What is undeniable, on the other hand, is that there are a lot of delivery people out there that simply do not seem to care anymore.

For example, in the YouTube video that I have posted below, you can watch a postal worker drive her truck on to someone’s lawn.  She is so lazy that she doesn’t even have the energy to take a few steps and place the package at the customer’s door…

And in this next YouTube video, another postal worker does not even get out of his truck.  He just carelessly tosses a package (which could contain something very expensive) toward the customer’s home…

What has caused so many Americans to no longer take any pride in their work?

Another place where this can be seen frequently is at fast food restaurants.

For instance, the photo that I have posted below of a Wendy’s employee gulping down soft serve ice cream with his mouth under the Frosty dispenser went viral on the Internet a while back…

I don’t know about you, but to me that is absolutely disgusting.  Needless to say, that worker quickly lost his job.

And of course there is no shortage of other fast food horror stories out there.

The following is one of my favorite examples…

Tony Hill, a pastor in Baltimore, Maryland, once got a deep-fried mouse along with his chicken at Popeye’s. The old “I found a rat in my fried chicken!” urban legend is decades old – this particular story was given a little credence, however, by the fact that local health authorities confirmed that the Popeye’s in question had a rodent problem.

These days even the criminals are getting lazy.

The following story is very tragic.  Violent crime in America is on the rise, and as the economy continues to get worse people are going to steal just about anything that is not bolted down.

In the little town of Denison, Iowa, a couple of thugs recently shot and killed an elderly couple while they were attempting to steal some scrap metal…

A Denison man told investigators that he and another man shot two people, then set fire to a trailer with the victims inside, according to court documents.

Jayden Chapman said he and Michael D. Schenk shot Marvin Huelsing, 80, and Alice Huisenga, 81, on Monday, according to a criminal complaint and affidavit filed in Crawford County District Court.

This is the kind of thing that we are going to see a lot more frequently in the years ahead.

Those thugs thought that they would get away with murder by burning the victims inside their own trailer, but they foolishly left behind a receipt from the Wal-Mart where they had just been shopping at the scene of the crime…

A pickup truck more than 200 yards north of the trailer also was burned. Near it, investigators found on the ground a receipt from the Denison Walmart with a debit-card number from a food-stamp card. Authorities determined the card was assigned to Schenck.

In this case, justice was served by the slothfulness of the American people, and I hope that those murderers are given the highest penalty allowed by law.

But in general, slothfulness is a terrible thing.  And it isn’t just a few people who are being slothful.  This is a national disease.  I like how Jim Quinn put it in his recent article…

But even though so many of us are aware of what is happening to us, we just can’t seem to break out of it as a nation.

It really does seem like most people are walking around in a fog these days.

Maybe the fact that 70 million Americans are on mind-altering drugs has something to do with it.

But unless Americans start taking more pride in their work again and start living their lives with meaning and purpose, it is going to be very difficult to envision a positive future for this country.

So do you have any stories similar to the ones in this article to share?

Please feel free to add to the conversation by posting a comment below.

Via The Economic Collapse Blog

It looks like MKUltra is in full effect: Video evidence

Presidential Commission approved use of Directed Energy Weapons on the populace,...

5 places that are censored on Google Maps

Why are NASA and the U.S. Media covering up a “devastating”...

Health Basics: The TRUE History of Cancer in the USA