Let me state from the outset that I totally agree with the press statements by Malaysia’s Defence Minister and Acting Transport Minister, Datuk Seri Hishammuddin Hussein that “we have conducted ourselves fairly, responsibly and history will judge us for that.”

And to a mischievous and presumptuous question from a correspondent of the Financial Times, Datuk Seri with confidence and integrity rightly said without any fear of contradiction that, “I don’t think we could have done anything different from what we have already done.”  Well done!

The Financial Times, CNN and other foreign media ought to pose similar questions to the US and its intelligence services and stop insinuating that Malaysia has not been transparent and/or engaged in a cover-up. Foreign media should stop engaging in dirty politics!

It is my hope that following the publication of this article, Malaysian mass media will focus on questioning the integrity of the US’s assistance to Malaysia in the first three weeks of the SAR mission, notwithstanding its recent offer of more assistance.

I take comfort that my reservations about the US and its intelligence services as well as other intelligence services closely linked to the US, especially British secret service, have been more than vindicated by Reuters in its news report on 28th March, 2014 entitled Geopolitical games handicap hunt for flight MH370

The search for flight MH370, the Malaysian Airlines jetliner that vanished over the South China Sea on March 8, has involved more than two dozen countries and 60 aircraft and ships but has been bedevilled by regional rivalries.

… With the United States playing a relatively muted role in the sort of exercise that until recently it would have dominated, experts and officials say there was no real central coordination until the search for the plane was confined to the southern Indian Ocean, when Australia largely took charge.

Part of the problem is that Asia has no NATO-style regional defence structure, though several countries have formal alliances with the United States. Commonwealth members Malaysia, Singapore, New Zealand and Australia also have an arrangement with Britain to discuss defence matters in times of crisis.

As mystery deepened over the fate of the Boeing 777 and its 239 passengers and crew, most of them Chinese, it became clear that highly classified military technology might hold the key.

But the investigation became deadlocked over the reluctance of others to share sensitive data, a reticence that appeared to harden as the search area widened.

“This is turning into a spy novel,” said an envoy from a Southeast Asian country, noting it was turning attention to areas and techniques few countries liked to publicly discuss.

Ultimately, the only country with the technical resources to recover the plane – or at least its black box recorder, which could lie in water several miles deep – may be the United States. Its deep-sea vehicles ultimately hauled up the wreckage of Air France 447 after its 2009 crash into a remote region of the South Atlantic.

While Putrajaya has been forced to reveal some of the limits and ranges of its air defences, the reluctance of Malaysia’s neighbours to release sensitive radar data may have obstructed the investigation for days.

At an ambassadorial meeting in the ad hoc crisis centre at an airport hotel on March 16, Malaysia formally appealed to countries on the jet’s possible path for help, but in part met with polite stonewalling, two people close to the talks said.

Some countries asked Malaysia to put its request in writing, triggering a flurry of diplomatic notes and high-level contacts.

‘It became a game of poker in which Malaysia handed out the cards at the table but couldn’t force others to show their hand,“ a person from another country involved in the talks said.

As in the northern Indian Ocean, where Chinese forces operate alongside other nations to combat Somali piracy, current and former officials say all sides are almost certainly quietly spying on and monitoring each other at the same time. (emphasis added)

The United States has taken advantage of the search for the missing Malaysia Airlines flight to test the capabilities of China’s satellites and judge the threat of Chinese missiles against its aircraft carriers, reports our sister paper Want Daily.

Erich Shih, chief reporter at Chinese-language military news monthly Defense International, said the US has more and better satellites but has not taken part in the search for flight MH370, which disappeared about an hour into its flight from Kuala Lumpur to Beijing in the early hours of March 8 with 239 people on board. Shih claimed that the US held back because it wanted to see what information China’s satellites would provide.

The above is the reality which we have to confront. Therefore, desist any attempt to label the above mainstream media articles as a “conspiracy theory”. Reuters has let the Genie out of the bottle!

Malaysia’s Minister of Transport Datuk Seri Hishammuddin gave hints of Malaysia’s difficulties (as his hands were tied by intelligence protocols and or refusal by the relevant foreign intelligence services and diplomatic reluctance) but our local media failed to appreciate the nuances of his statements by not directing their questions at those parties that have failed Malaysia as their neighbour and in their duties under various defence treaties and arrangements.

Malaysian media, please read at the minimum three times, the sentences in bold AND WAKE UP TO THE REALITY that our country has been badly treated even though our country put all its national security cards on the table so that countries whose nationals are passengers on flight MH 370 could come forward with sincerity to assist in resolving this unfortunate tragedy which is not Malaysia’s making.

Malaysia is but a victim of this tragedy whose plane, MH 370 was used for a hidden agenda for which only time will reveal.

In my previous article posted to the website on the 27th March, 2014, I exposed how Israel is exploiting the tragedy to create public opinion for a war against Iran, a Muslim country that has close ties with Malaysia.

At the outset of the SAR Mission, all concerned stated categorically that every scenario, no matter how unlikely would be examined critically with no stones left unturned – terrorist hijacking, suicide mission, technical failures, inadequate security, criminal actions of the pilot and or co-pilot etc.

Given the above premise, families of the passengers and the crew of MH 370 have every right to ask the following questions of the US and other countries that have sophisticated technologies to track and monitor airplanes and ships in all circumstances.

Such questions should not be shot down by those who have a hidden agenda that such queries amount to “conspiracy theories”. Far from being conspiracy theories, we assert that the questions tabled below and the rationale for asking them are well founded and must be addressed by the relevant parties, failing which an inference ought to be drawn that they are complicit in the disappearance of MH 370.

3)        If the latter, which country or countries have the technologies to execute such an operation?

5)        If so, what are the likely methods for such a mission – Biological weapons, dirty bombs?

8)        The time sequence of countries identifying the alleged MH 370 debris in the Indian ocean was first made by Australia followed by France, Thailand, Japan, and Britain via Immarsat. Why did US not offer any satellite intelligence till today?

9)        Prior to the switch of focus to the Indian ocean, was the SAR mission in the South China seas, used as a cover for the deployment of undersea equipment to track and monitor naval capabilities of all the nations’ navies competing for ownership of disputed territorial waters? Reuters as quoted above seems to have suggested such an outcome. 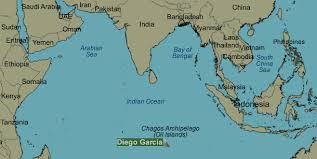 10)     Why was there been no focus, especially by foreign mass media, on the intelligence and surveillance capabilities of Diego Garcia, the strategic naval and air base of the US?

11)     Why no questions were asked whether the flight path of MH 370 (if as alleged it crashed in the Indian Ocean), was within the geographical parameters of the Intelligence capabilities of Diego Garcia? Why were no planes deployed from Diego Garcia to intercept the “Unidentified” plane which obviously would pose a threat to the Diego Gracia military base?

12)     The outdated capabilities of the Hexagon satellite system deployed by the US in the 1970s has a ground resolution of 0.6 meters;  what’s more, the present and latest technologies boast the ability to identify objects much smaller in size. Why have such satellites not provided any images of the alleged debris in the Indian Ocean? Were they deliberately withheld?

13)     On April 6th, 2012, the US launched a mission dubbed “NROL-25” (consisting of a spy satellite) from the Vandenberg Air Force Base in California. The NROL-25 satellite was likely rigged with “synthetic aperture radar” a system capable of observing targets around the globe in daylight and darkness, able to penetrate clouds and identify underground structures such as military bunkers. Though the true capabilities of the satellites are not publicly known due to their top-secret classification, some analysts have claimed that the technology allows the authorities to zoom in on items as small as a human fist from hundreds of miles away. How is it that no imagery of MH370 debris was forwarded to Malaysia, as this capability is not classified though other technologies might well remain classified? (Source: Slate.com)

14)     Could it be that the above capabilities were not as touted?

15)     However, in December, 2013, the USAtlas V rocket was launched carrying the spy satellite NROL-39 for the National Reconnaissance Office, an intelligence agency which is often overshadowed by the notorious National Security Agency (NSA), only it scoops data via spy satellites in outer space. The “NROL-39 emblem” is represented by the Octopus a versatile, adaptive, and highly intelligent creature. Emblematically, enemies of the United States can be reached no matter where they choose to hide. The emblem boldly states “Nothing is beyond our reach”. This virtually means that the tentacles of America’s World Octopus are spreading across the globe to coil around everything within their grasp, which is, well, everything (Source: Voice of Moscow). Yet, the US with such capabilities remained silent. Why?

It cannot be said that it is not within the realm of probabilities that the US may not want the plane MH 370 to be recovered if rogue intelligence operators were responsible for the disappearance of MH 370.

By coming out openly to explain the predicament faced by our country, Malaysia may prevent a hostile act against a third country.

I therefore call upon Malaysian mass media to be courageous and initiate such queries as only the US and other intelligence agencies can give definitive answers to the above 15 questions.

It is futile to demand answers from Malaysia as we are not in any position to supply the information as we do not have the capabilities of the global and regional military powers.

Malaysians must unite behind the government so that our leaders need not feel that they are alone shouldering this enormous burden.

Matthias Chang is a prominent Malaysian lawyer and author, who served as political secretary and adviser to former Prime Minister Dr. Mahathir Mohamad.