Every month, reports condemn the general public for downloading movies and TV shows without permission, but perhaps those industries need to look a little closer to home. A new survey among film industry professionals suggests that almost 40% have downloaded movies and TV shows illegally.

Reports, research and surveys covering piracy-related issues have been released in their dozens in recent years, with many of them painting a picture of two distinct groups of people – those who illegally download and those who pay for content.

Of course, the reality is that many people who obtain content for free also cheerfully pay for content too. In fact, some studies have found that the entertainment industry’s best customers are also illegal downloaders.

But what if there was evidence to suggest that some of those pirates were actually the very people helping to create movies and TV shows? That’s one of the intriguing findings of a survey carried out by Stephen Follows, a writer and producer with a keen interest in discovering what makes the industry tick.

“Many of the decisions in the film business are based on gut, opinion and gossip so I find it fascinating to research the topics and see what the numbers say,” Follows informs TorrentFreak.

“Piracy seemed like a ready topic to research so I added a few question into a survey I ran of 1,235 film industry professionals. The respondents were all people who had been to one of the three major films markets in the past five years – Cannes, Berlin or the American film Market.”

Follows first set of questions focused on whether the film professionals felt that piracy had affected their business. The responses were then split by industry sector and budgets the professionals work to.

Considering the anti-piracy rhetoric coming out of Hollywood during the past thirty years, it’s perhaps surprising that 53% of all respondents said that piracy had either no effect or a positive effect on their business. 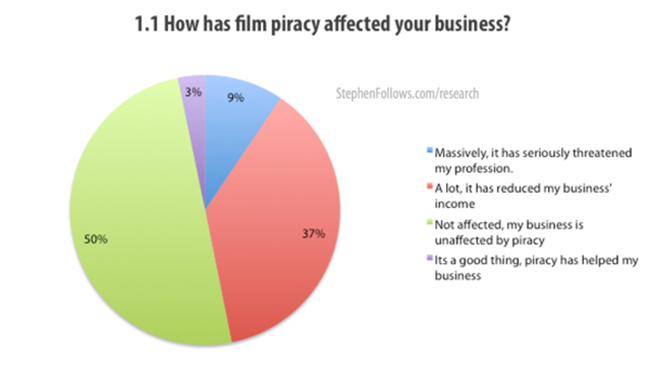 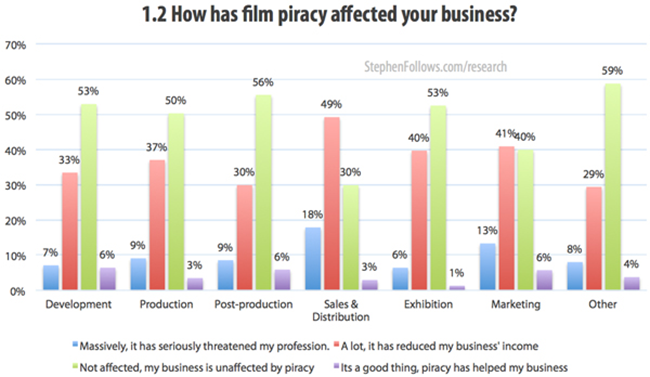 Turning the tables to discover how the industry professionals are themselves affecting piracy rates couldn’t be approached directly for obvious reasons, so Follows tried a different tactic.

“When it came to researching how many of them actually illegally download movies I felt I needed to be a bit sneaky,” he told TF. 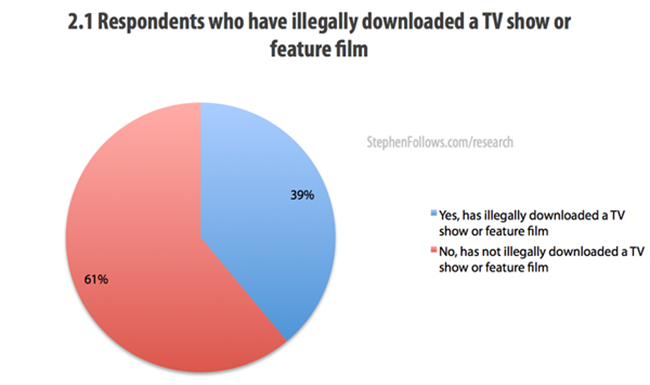 Also of interest is how the percentage of those who admitted illegal downloading fluctuated according to industry sector, with 55% of those in marketing saying they have grabbed movies or TV shows without paying versus zero percent in exhibition (movie theaters). 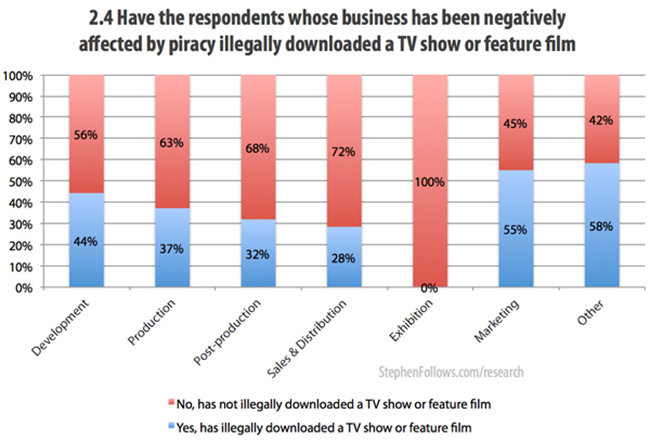 Sales and distribution, the sector that said they’d been most affected by piracy, accounted for the next lowest piracy ‘confession’ rate of 28%.

“These are the middlemen behind the scenes of the industry who negotiate the rights between producers and cinemas/retailers. They are part of the reason why there are so many damned logos at the start of every movie,” Follows explains.

“They have the largest vested interest in stopping piracy as they don¹t have many other reasons for doing what they do (unlike filmmakers who might be wanting to create art/entertainment) and no other source of income, unlike cinemas who make a fortune on Coke/popcorn etc.”

Further reading on Stephen Follows’ research and methodology can be found hereand here. A great video he produced for Friends of the Earth can be watched on Vimeo.

ISPs and rightsholders unite to block pirate sites in Germany

Victoria, Australia, makes it illegal to not affirm gender dysphoria