Thanks to a treasonous President and a cabal of backstabbing, spineless Republican leaders, America stands tonight on the verge of plunging into outright “trade totalitarianism.”

The Drudge Report (see below) is headlining the news today, announcing “Republicans rush vote on Obamatrade before anyone reads it.” Congress and the President, in other words, are now behaving like a group of high school party boys in a mad rush to remove all the bear cans and vodka bottles from their family living room after learning their parents are returning home early from a family trip.

How is this not treason?

For reasons that still remain somewhat mysterious, a frantic push is on at the White House and the highest levels of Congress to pass the secretive TPP trade deal before anyone has a chance to find out what the document really says.

The abject absurdity of this situation goes beyond extreme: It’s treason. It’s the selling out of America’s interests to any number of unknown foreign nations, regulatory bodies or governing entities which might soon rule over every sector of the U.S. economy, from health care to high tech.

There’s some pushback taking place on Capitol Hill, but it might be too little, too late. “A bipartisan group of lawmakers is calling for a change to House rules to require the administration to make all trade deals publicly available for 60 days before they could be approved using fast-track authority,” reports TheHill.com.

The law is an effort to halt the so-called “fast track powers” that would grant President Obama the ability to adopt and enforce a secretive international trade deal that even most members of Congress have never seen, much less approved as law. That this push is being led by the spineless, corrupt, anti-American leadership of the Republican party is nothing less than astonishing. Here’s the party that’s supposed to stand up for the Constitution and the rule of law committing high treason by selling out America’s interests to foreign entities under a secretive (and likely illegal) trade deal that no one gets to read.

If you thought Obamacare was bad with Nancy Pelosi’s claim that “We have to pass it to find out what’s in it,” then hold on to your britches. You’re about to get body slammed into a tar pit of tyranny as the leaders of both political parties conspire to bend America over at the waist and insert a giant inclined plane helically rotated around a cylinder (i.e. “screwed”).

Some Americans are so frustrated with the situation that they’re delivering Obama rubber stamps to House Republicans as a form of symbolic protest: 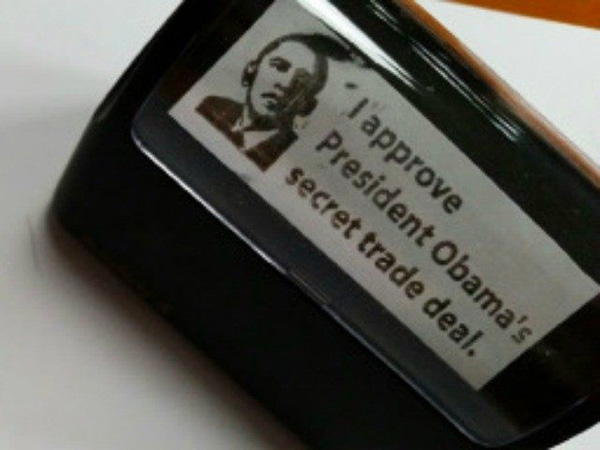 Ever wonder why they don’t want anyone to read it?

If this trade deal were a good deal for America, Obama and the Republicans would be begging you to read it. They’d be issuing press releases bragging about their “amazing accomplishments” at achieving this huge win for America.

But no. They don’t want you to read it. And the reason is obvious: It’s a huge LOSE for America. This so-called “free trade deal” is actually a total surrender of America’s sovereignty to foreign governments. It almost certainly betrays the American worker, places the country at a strong competitive disadvantage and will cause the loss of millions of American jobs.

The entire trade deal is likely being ghostwritten by the world’s most powerful and evil global corporations in order to benefit them at the expense of everyone else. It probably contains language designed to bypass labor laws in America and allow powerful globalist corporations to avoid paying taxes, avoid paying pensions, fire American workers and even bypass worker safety regulations.

As a great example of the kind of sickening corporate greed driving these sort of “free trade” agreements, today we learn that after replacing American workers with foreign replacements, Disney then blacklisted those American workers to prevent them from being hired by any contractor doing business with Disney.

Yeah, read that again. Disney hands you a pink slip, then blacklists you with other potential employers. How’s that for a big fat middle finger to their former employees?

As the Daily Caller reports, “The American tech workers Disney laid off in January after forcing them to train their foreign replacements were put on a “black list” that disqualified them from hire by any contractor that works with Disney, emails obtained by The Daily Caller News Foundation between one of the laid off workers and a recruiting firm show.”

Disney, it seems, isn’t satisfied just to fire American workers and shift their jobs to low-wage foreign replacements, it then want to make sure those American workers stay jobless as long as possible. It’s the kind of punitive display of pure, destructive evil that only a globalist corporation can pull off on a regular basis.

The Obamatrade deal is likely chock full of provisions that would allow corporations like Disney to give U.S. workers the pink slip and replace them with cheap foreign workers for a fraction of the cost. That explains all the secrecy, of course: If the American people ever found out what’s really written in these secret trade deals, they’d be marching in the streets and throwing the bums out of office in Washington.

And so “rule by secrecy” becomes the new standard for a criminal, treasonous government that quite literally hates everything America once stood for: innovation, economic prosperity, family values, respect for the law and uniform justice.

Now, instead, America is run by a cabal of criminals who sell out the People at every opportunity, often for as little as $500 in campaign contributions.

There is no more democracy in America. What you are living under now is absolute rule by a secretive surveillance state that holds all human rights and dignity in contempt. The bureaucrats in Washington hate you. They want to make you obsolete! And if it’s not to be accomplished with foreign workers, they’ll unquestionably achieve it with humanoid worker robots that will replace as much as 70% of the human work force in the next 30 years or less.

The plutocrats in Washington no longer care what anyone thinks because they know something that most people have no idea is even on the agenda: Global depopulation that ultimately eliminates most human beings living today.

When it comes to international trade agreements, the only chance you’re ever going to have to come into contact with the trade text is when boneheads like Boehner and Obama roll those documents into the shape of a large cylindrical shaft and shove it up your rear sphincter. From there, you’ll probably need a colonoscopy to find out what’s really in it… which is somehow ironically appropriate considering what you’ll find on the pages.

House impeaches President Trump for abuse of power and obstruction

Citizens in these 3 US states took action on water fluoridation...