For decades the government has denied that beings of extraterrestrial origin have made contact with humans.

But a wide body of evidence suggests otherwise, including some recent statements from NASA insiders. The latest comes from none other than astronaut Scott Kelly who has spent more time in space than any other American. Kelly often shares photos he takes on the International Space Station via his earth-bound Twitter account and his latest has piqued the imagination of many UFO hunters.

The picture, taken about 200 miles above southern India, shows what appears to be a large object with lights on both sides.

Day 233. Once upon a #star over Southern India. #GoodNight from @space_station! #YearInSpace pic.twitter.com/ipT4AsDDir

Could Kelly be hinting at the existence of aliens? Or is there another explanation for the lights in the photo?

According to UFO Sightings Daily, though Scott Kelly made no mention of the craft in his Tweet, his message to the general public hinting that aliens are real has been well received:

Scott Kelly likes to send out photos of the view from the windows of the space station…and they look cool. This one however has a cigar shaped glowing UFO with a metallic body in it. The UFO is about 25 meters long and 150-200 meters away. It looks like Scott was trying to hint at the existence of aliens. Message received Scott, and thanks.

Of note is that “cigar shaped” flying objects have been documented for centuries.

Most recently, Chinese officials were forced to shut down Hangzhou’s international airport in July of 2010 because of an unidentified aircraft. Notably, as you’ll see from the picture and video footage below, the craft was cigar shaped with lights on both sides.

A still image of the UFO over China: 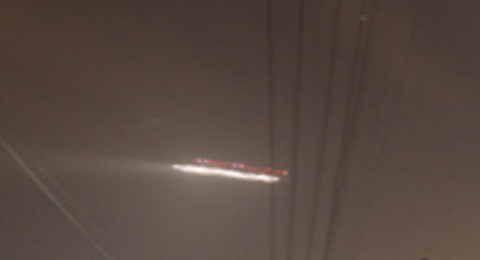 One could, of course, argue that though the object is obviously of technology not known to most earthlings, it may be the result of highly classified man-made technology initiatives in places like Area 51, which is believed to be a testing ground for secret military projects.

But then how do we explain the April 1561 celestial phenomenon over Nuremberg, Germany, which happened centuries before the Wright Brothers first took to the skies at Kitty Hawk? If you’re not familiar with the story, scores of witnesses described a “battle in the sky” over their town, claiming that two opposing forces with aerial weapons and crafts were at war.

The following illustrated news notice was published just a few days after the event on April 14, 1561. Once again you may notice a familiar object which just so happens to be shaped like a cigar… with lights closely mirroring the Chinese UFO. 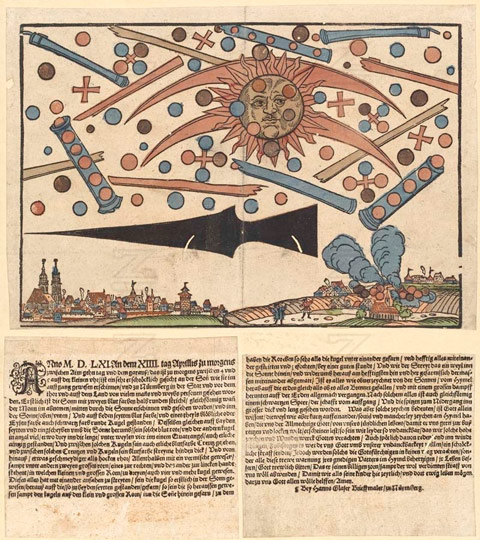 A partial translation of the German notice:

Likewise there stood on both sides and as a torus about the sun such blood-red ones and other balls in large number, about three in a line and four in a square, also some alone. In between these globes there were visible a few blood-red crosses, between which there were blood-red strips, becoming thicker to the rear and in the front malleable like the rods of reed-grass, which were intermingled, among them two big rods, one on the right, the other to the left, and within the small and big rods there were three, also four and more globes.

These all started to fight among themselves, so that the globes, which were first in the sun, flew out to the ones standing on both sides, thereafter, the globes standing outside the sun, in the small and large rods, flew into the sun. Besides the globes flew back and forth among themselves and fought vehemently with each other for over an hour. And when the conflict in and again out of the sun was most intense, they became fatigued to such an extent that they all, as said above, fell from the sun down upon the earth ‘as if they all burned’ and they then wasted away on the earth with immense smoke.

After all this there was something like a black spear, very long and thick, sighted; the shaft pointed to the east, the point pointed west. Whatever such signs mean, God alone knows.

Earlier this year an International Space Station live video feed caught three unidentified objects before cutting off abruptly. According to NASA the video feed was cut because of a bad signal.

Whether the object spotted on astronaut Scott Kelly’s recent picture was an alien craft, a secret government project or some sort of optical effect will likely remain a mystery for the immediate future. NASA has thus far ignored requests for comment.

Nonetheless, we know something is out there. And perhaps one day soon the truth will be revealed.