The free market victories against the sleazy biotech industry are coming at a rapid pace now, and the latest announcement is a real game changer: Chipotle Mexican Grill has outright rejected all GMOs and, as of today, is now serving all non-GMO ingredients in its foods.

“When it comes to our food, genetically modified ingredients don’t make the cut,” says an official announcement on the Chipotle website. “…[T]he food we serve should be made with ingredients raised with care for animals, farmers, and the environment. We’re doubtful that the GMO ingredients that used to be in our food meet these criteria.”

The fighting words from Steve Ells very closely mirror the clean food mantra that Natural News has been advocating for years. He says, quoted in the New York Times:

This is another step toward the visions we have of changing the way people think about and eat fast food… Just because food is served fast doesn’t mean it has to be made with cheap raw ingredients, highly processed with preservatives and fillers and stabilizers and artificial colors and flavors.

Well said, Steve. You get it. Your customers get it. Your shareholders might even get it, too: people want clean food, transparent supply lines, ethical treatment of animals and no GMOs!

“While some studies have shown GMOs to be safe, most of this research was funded by companies that sell GMO seeds and did not evaluate long-term effects,” says the Chipotle website. “Evidence suggests that GMOs engineered to produce pesticides or withstand powerful chemical herbicides damage beneficial insect populations and create herbicide resistant super-weeds.” 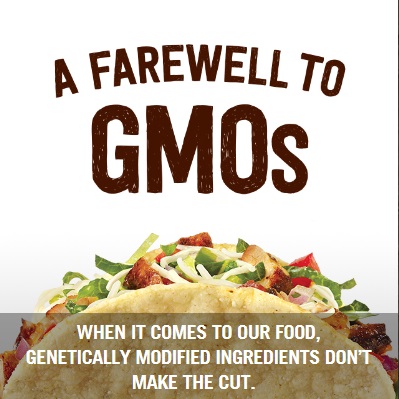 For the first time, Natural News publicly endorses the leadership of a fast food restaurant chain

With this announcement, Chipotle makes history. It is the first fast food chain in the world to outright reject GMOs in a very public manner, making its stance a feature of its food offerings.

For this reason, Natural News is now publicly endorsing the leadership and clean food vision of the Chipotle restaurant chain, honoring the courage and pioneering spirit of this chain in staking out new territory in the clean food movement.

I don’t normally eat at fast food chains, but I’m now going to make it a point to visit a Chipotle soon and check out what they have to offer. If you happen to see me chowing down at a Chipotle restaurant in Austin, Texas, don’t be surprised… (and yeah, it’s totally cool to say hi!)

Why switching to 100% non-GMO is a remarkable achievement

In order to help you appreciate the difficulty of going 100% non-GMO, allow me to share some of what’s involved in this. I’m qualified to share this because I’m intimately involved in the product sourcing, certification and laboratory testing of raw materials for products sold via the Natural News Store. We are certified organic and GMP-compliant (FDA rules). I’m also the lab science director of the Natural News Forensic Food Lab, which is in the process of achieving ISO 17025 accreditation.

Sourcing non-GMO ingredients requires a tremendous supply line effort involving non-GMO certification and documentation, complex raw materials acquisition logistics, and laboratory testing of raw materials to ensure they are indeed free of genetically engineered ingredients. None of this is easy to accomplish, and it all requires a concerted effort (and additional cost).

“Ridding the supply chain of genetically altered components is difficult,” reports the New York Times. “They lurk in baking powder, cornstarch and a variety of ingredients used as preservatives, coloring agents and added vitamins, as well as in commodities like canola and soy oils, corn meal and sugar.”

It’s surprising to even see this printed in the New York Times, but it’s also very welcomed. Indeed, the NYT is correct on this point: GMOs are “lurking” even in many popular vitamins, protein powders and some superfoods! Almost anything made from corn — maltodextrin, corn starch, corn syrup and even ascorbic acid — is largely derived from genetically engineered corn.

That’s why sourcing foods made without GMOs is no walk in the park. It adds complexity and cost to the sourcing of those foods, and at times it can cause supply line shortages. On the flip side, however, it also creates enormous profit opportunities for farmers who wish to grow non-GMO foods. The demand for non-GMO crops is now at an all-time high in America, and more and more farmers and learning that they can earn far more revenue by ditching biotech seeds and growing organic or non-GMO crops instead. 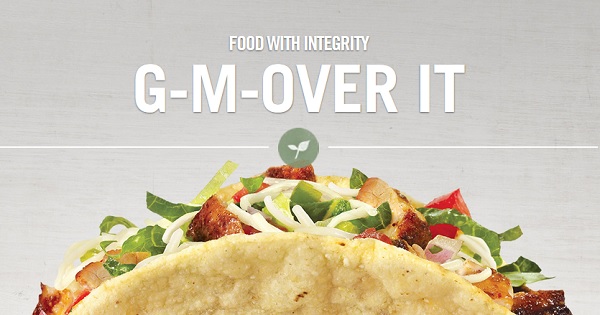 The timing of this announcement by Chipotle is notable, as it coincides with McDonald’s declaring another miserable quarter of falling revenues and plummeting market share. McDonald’s is in desperation mode, scrambling to try to figure out why fewer and fewer people want to eat its factory-processed, genetically modified, artificially-flavored “fake foods.” (Is that a Chicken McNugget, or a tiny scrubbing sponge for my toilet?)

The idea that consumers might be informed enough to make holistic choices about food ingredients, food supply lines, the ethical treatment of animals and even the ecological costs of certain ingredients (such as palm oil) seems to absolutely baffle McDonald’s executives. They appear to be stuck in the 1950’s, believing that food marketing is all about social engineering — children’s playgrounds and emotional marketing slogans — rather than the food itself.

What McDonald’s has yet to realize is that food awareness is skyrocketing everywhere, in large thanks to the very same independent media outlets that McDonald’s can’t control (like Natural News). With independent organizations like Natural News now owning and operating its own high-level food forensics laboratories, the scrutiny of food can no longer be controlled by corporations doing things like pressuring universities or the FDA to remain silent about food toxins and contaminants.

In other words, the age of independent laboratory scrutiny of foods is now upon us… and food transparency will be forced into the open, even as fast food corporations like McDonald’s would likely prefer to keep their food composition a secret. Imagine what will happen when independent labs across the alternative media universe upgrade their laboratories to test for pesticides, hormones or even glyphosate contamination! At that point, factory food companies like McDonald’s will have their full chemical composition publicly revealed for the entire world to see. And it won’t take long for consumers to see why restaurants like Chipotle are a far healthier choice.

Now that Chipotle has taken a courageous and game-changing stance against GMOs, we’re all going to get to enjoy the entertainment of watching the “biotech sleazebag brigade” roll out its contrived attacks on Chipotle and anyone who endorses them.

These attacks will of course be staged by the so-called “Monsanto Discredit Bureau” which has now been utterly exposed and revealed to be a group of quackpot criminals and fraudsters, such as the felony criminal doctor running the American Council on Science and Health, an astroturfing corporate front group that was behind the recent attempt to smear Doctor Oz.

Biotech smear operatives work for publications like Vox.com, Slate and the Washington Post, where defamation and character assassination attacks are routinely waged against humanity and all those who defend humanity against the mass poisoning by pesticide corporations (and GMO companies). Increasingly, no one believes the biotech smear campaigns anymore. That’s why the science editors of the Washington Post and other mainstream media outlets are increasingly seen as being propaganda mouthpieces for Monsanto and Big Pharma rather than real journalists. “Journalism,” as they say, is printing what the corporations and governments don’t want printed. Everything else is just public relations.

What almost everyone is coming to realize is that nearly every single person defending the biotech industry is a paid corporate shill. Take a look at former Forbes.com writer Jon Entine, for example, who Natural News exhaustively exposed as being a violent wife abuser, according to these court documents. He was a key author for the ACSH, writing a booklet that ridiculously tried to claim atrazine was environmentally safe.

People who try to defend glyphosate, GMOs, atrazine, pesticides and mercury in vaccines only discredit themselves. The public is waking up, and they aren’t stupid. They know that GMOs are toxic, glyphosate is destructive to the environment, mercury in vaccines causes harm to children and, above all, corporations and the mainstream media are lying to them.

ACTION ITEM: Visit Chipotle this week and tell them why!

To celebrate this mass awakening, I’m now suggesting that everybody rush out to Chipotle this week and enjoy a non-GMO meal there. While you’re there, ask to speak to the manager of the restaurant and tell them you are a customer because of their rejection of GMOs.

Let ’em know as long as they take a leadership position in clean food, you will continue to reward them with your business. Vote with your dollars. Punish the poison-pushing corporations like McDonald’s, Kellogg’s and General Mills by simply denying them your business. Reward honorable, ethical companies like Chipotle, Nature’s Path and One Degree Organic Foods by purchasing their products.

You hold the power in your hands to change the food industry one purchase at a time. In fact, your power is enormous and lasting. Exercise it NOW… and you WIN!

Fast results for your health: One week of eating organic found to dramatically lower toxin levels in your body

Every bite you take is either FIGHTING disease or FEEDING it

Is this why only organic fruit and vegetables stop cancer?

Houston rescuers under attack, shot at