The condition in Syria continues to worsen by the day, and now this week it seems that the internet and all mobile communications have been cut off mysteriously.

The first suspect in these matters would be the government, as they maintain a strict control over all internet traffic and many remember just over a year or so ago when Egypt shut off the internet, prompting a massive public outcry.

However, the Syrian government denies any involvement, claiming that terrorists are responsible for the disruption in communications.

The BBC reported that:

“Networking firm Renesys said the country’s connection protocols were unreachable, “effectively removing the country from the internet”.Local reports suggested that the internet had been down since early afternoon, and that telephone lines were only working intermittently.  The Syrian government has blamed “terrorists” for the disconnection.”

Syria’s minister of information told a pro-government television station that”The terrorists targeted the internet lines, resulting in some regions being cut off”.  Local activists have said that small outages of this nature have happened in the past, before military operations took place, but never before has an outage of this scale occurred.

Renesys, a US-based company which tracks internet connectivity worldwide, said on its blog: “In the global routing table, all 84 of Syria’s IP address blocks have become unreachable.”

“The Syrian Internet is only about 2 percent the size of Egypt’s Internet, it’s a much smaller place,” said Jim Cowie, chief technology officer and co-founder of Renesys. “It’s extremely plausible someone could do this by turning off the Internet, or that it’s collateral damage of someone turning off the power in critical facilities.”

The graph below was posted by another online monitoring firm called Akamai: 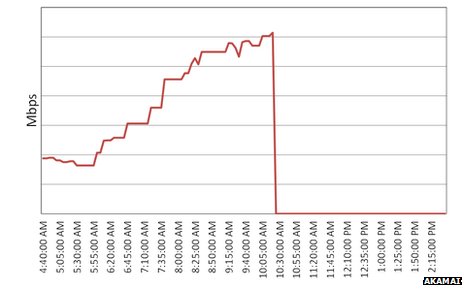 The graph shows an instant cut off for all communications across the board around 10:30am, which was 12:26 p.m. local time.  As this outage takes place the battle is still raging between the Syrian government, western backed rebels, and the innocent people of Syrian who are caught in the middle.

John McAfee: Everybody has something to hide it’s just a matter of from whom