We dropped our bushcraft kits in my shop when we got home. I’d just taught my grandson to cook his first simple meal over our campfire – Raman noodles! The next morning I was greeted with this… 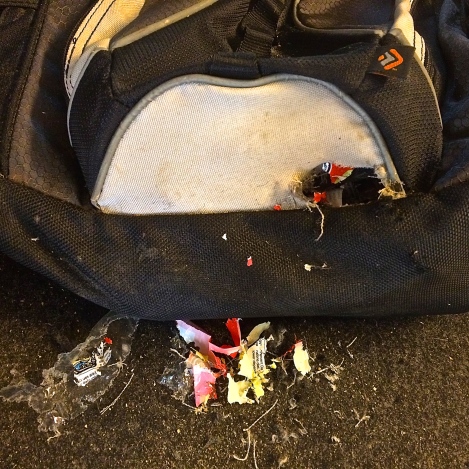 In our excitement over his latest bushcraft lesson, we forgot to remove his food items from his pack. 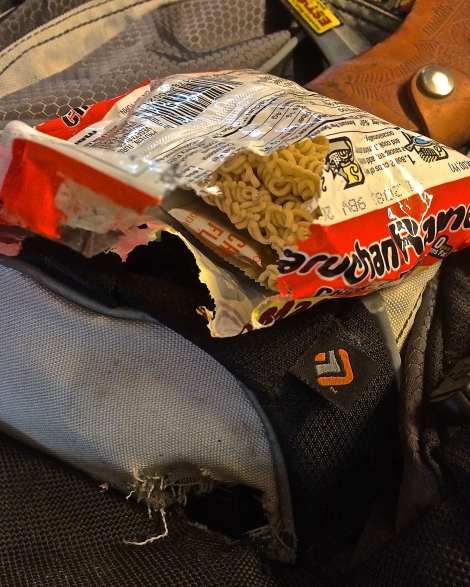 Actually, these rodents will eat just about anything. We were fortunate that we only lost a pack of cheap noodles and was left with only one extra opening in his pack. If left to their own survival instincts – they gotta eat – rats can destroy non-hardened food storage items and spread disease.

I’m always trying to build a better mouse trap. I saw a couple of bucket rat traps on YouTube that seemed clever. This would be the perfect time to test the theory.

Here’s how to make a bucket rat trap in 15 minutes from everyday stuff.

How to Make a Bucket  Mouse Trap

Drill two holes on opposite sides of the bucket about a half-inch below the rim. The hole diameter should be a little larger than the wire you’ve chosen to use.

Skewer the can with the wire. This took time and patience trying to thread the wire through the second hole blindly. You could use a clear water bottle with the cap on to make this easier.

Once the wire is through both ends, make sure the wire extends a few inches past the bucket on both edges. With the threaded can centered over the bucket, crimp the wire at both ends of the can. This will keep the can sliding to the edge of the bucket which would defeat the trap. 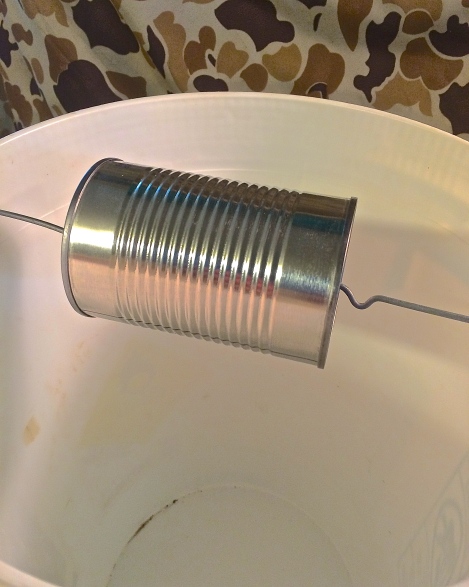 If you think you’ve got a rat to deal with, pour about 6 to 8 inches of water in the bucket.Big rats can jump. The water prevents the vermin from leaping to freedom. For mice, use less water. At least that’s the theory…

Warning: You’re about to see dead stuff! If easily offended by the sight of dead rats, turn back now!

Just walked out to my shop to check the bait and Ratzilla just ran up the wall onto some storage shelves. This sucker stands on the edge of the bucket eating my peanut butter!

I stand there in shock as he hides on top of the shelf mocking me with his shrieks. It’s on! No more cute little YouTube contraptions. You know, there are times when a better mouse trap has already been built. Use it!

I pulled a rat trap from my bushcraft kit. Large rat traps are part of my survival trapping kit. They’re useful for trapping tree rats (squirrels) and other small game in a survival scenario.

I’ll finish the MOUSE trap tutorial in a moment. But for now, I’ll share my progression of trap sets for this monster… 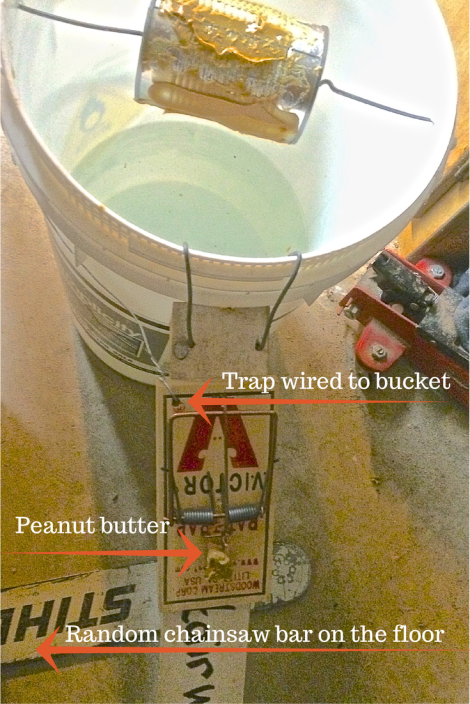 Epic fail! The Victor rat trap trigger had been stripped of peanut butter and was dangling from the bucket. Now what? DRG suggested that the “Stairway to Heaven” was not wide enough and the Victor trap needed to be placed, as designed, flat on the floor. I reset the trap and anchored it. I’ve had rats drag traps out of reach before. Rotting rat inside a wall is not pleasant! 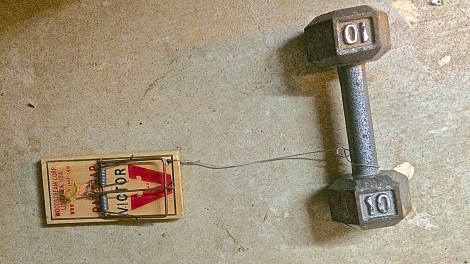 Update: He didn’t have to. He cleaned the peanut butter off the trigger… AGAIN!! I’m ready to load the .38 with snake shot! On second thought, he may take a hollow point. This is war!

DRG suggested using a different bait, one he wouldn’t easily remove. I modified the trigger to make the V-shaped metal tab stick up at a 45º angle. I then formed a ball of cheese around the trigger and reset the trap.

Thirty minutes later I flip the light switch on with my neck hair bristled. It looked like a murder scene minus the white chalk outline. Finally, Ratzilla was dead. I’ll spare you the bloody shots. No, this is not the bloody shot below. He measured over 15 inches from nose to tip of the tail. 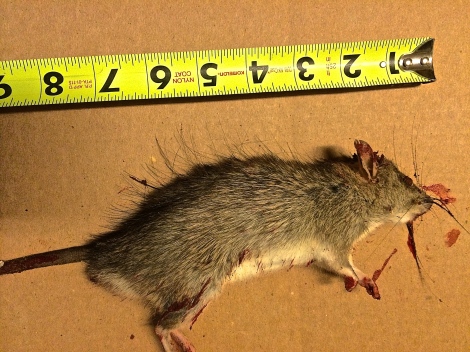 If you see one, there is usually more. And they don’t leave on their own accord. I reset the trap after 11 o’clock that night – way past my bed time. Checked the next morning and one of his girlfriends couldn’t resist the cheese. Disposed of her and reset. You guessed it, caught another one! Three dead rats. 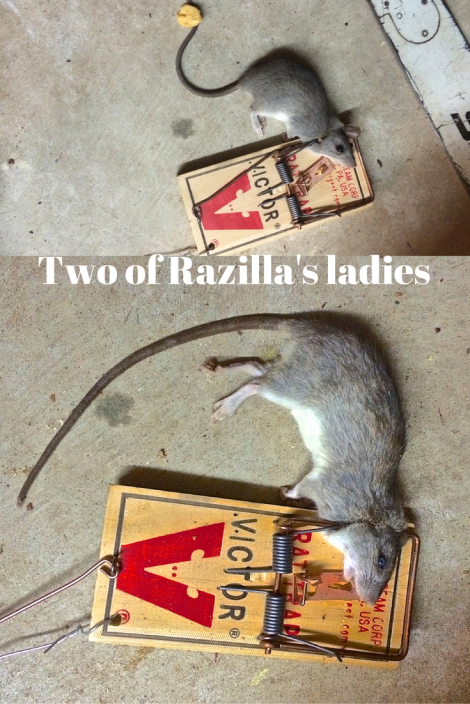 Not sure if the continuation of the tutorial is even necessary at this point. I didn’t have a mouse problem, I had rats! This is why I continue to stress the importance of trading theory for ACTION before you actually need critical gear and equipment.

Here’s how to finish the bucket mouse trap.

Spread peanut butter over the surface of the can. When a mouse scurries up the ramp to eat, in theory, he will leap to the can for the bait, spin-off the wheel and drown. I can’t see why this bucket mouse trap wouldn’t work on mice.

This set up is genius on paper. It would allow me to catch multiple varmints without having to re-bait or reset the trap. Set it and forget. But in real life, you’re going to need a bigger bucket – or smaller rats.

The thought of using a wide-mouth bucket to increase the distance to the bait wheel occurred to me early on in this epic battle. But due to my obsession with destroying Ratzilla’s posse in a timely manner, I had no time to waste. I wanted them dead. Now!

What I discovered is that my bucket trap was nothing more than a rolling rotisserie for large rats. Stick with proven traps for Ratzilla and company or build a better mouse trap.

P.P.S – If you find value in our blog, Dirt Road Girl and I would appreciate your vote on Top Prepper Sites! You can vote daily by clicking here or on the image below. Check out all the other value-adding sites while you’re there.

Man claims: ‘There is over 7,000 deployed troops inside Washington D.C…...

Antifa bussed into the rally on 5 white busses, escorted by...

How to build a primitive freshwater prawn trap by hand

More reason to be a prepper: Aid is arriving by the...