California’s green living delusion is collapsing by the day. As the drought worsens, and lawns everywhere have turned to crispy brown dead zones, desperate residents are hiring companies to spray paint their lawns green.

As the Daily Mail reports:

As California is mired by its fourth year of drought, one industry has sprouted up from the seemingly endless dry spell.

In an effort to brighten up dry and unsightly lawns, some landscapers have been offering the innovative solution of painting lawns green.

LawnLift… is now a leading provider of lawn paint for homeowners, hoteliers, wedding planners and others who want to change the look of their drought-stricken grass.

Just what we need: More chemicals in the shrinking water supply

With lawns now being spray painted green, California cements its newfound role as the capital of delusional green living where the “green” comes from spray paint laced with chemical pigments.

If it ever does rain again in California, all that fake green will be washed right down the drain, further contaminating the dwindling water supply with yet more chemicals… on top of all the chemotherapy drugs, antidepressants, painkillers and cocaine already found in California’s water supply thanks to the mass over-medication of the population.

Related:  Dutchsinse: We have a new hotspot on the side of the supervolcano 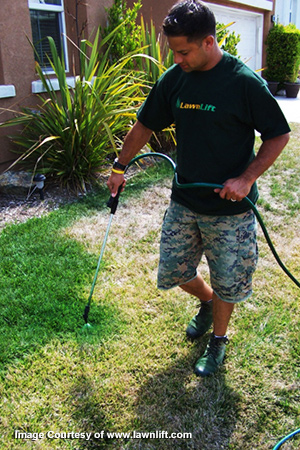 The LawnLift company, by the way, says its green paint product is entirely non-toxic. But I can’t find any ingredients listed anywhere on its website.

The company’s FAQ document, which is riddled with hilarious typos, says things like:

The Completion: [sic] Never actually binds to the grass, runs off with water application and rubs off on everything.

LawnLift says, “LawnLift is not harmful to pets that have ingested grass treated with it,” but its own MSDS says its product “May cause respiratory tract, eye and skin irritation.”

That same MSDS explains why the company isn’t willing to tell you what’s actually in it: “The composition of this material is a trade secret.”

In other words, you’re supposed to spray it on your lawn and have it wash down the sewers with the next rain even though they won’t tell you what it contains! Somehow this is especially fitting in a state where Nancy Pelosi once claimed we should all pass Obamacare so we can someday find out what’s in it.

Perhaps LawnLift really is totally safe, but we won’t know until the company reveals the ingredients. The company says “Lawnlift is a naturally occurring pigmented dye that is 100% safe for the environment and 100% biodegradable where as [sic] the other guys sell and apply toxic latex paint that will choke out any chance of life and is not safe for anyone to play on!”

Then again, I’ve seen natural protein companies make all sorts of false and deceptive claims on their own labels, too. By default, I don’t trust companies that refuse to disclose their ingredients.

Spray painting lawns green is the perfect metaphor for what’s happening in California at every level. It’s the “Disneyfication” of the state, where everything from politics to public health policy has collapsed into a state of total theater and desperate fakery.

This is not to blame its citizens, of course, many of whom are totally fed up with their own lying government, corrupted state Senators, mindless entitlement spending and police state control over their lives. Many activist citizens of California are fighting hard to restore their state to the greatness it once celebrated, but they are thwarted at every turn by disastrously wrongheaded bureaucrats like Gov. Jerry Brown who just can’t help turning the state into a real-life example of the movie Idiocracy.

Determined to further plunge the state into public health chaos, the California Senate voted today to pass SB 277 which would eliminate nearly all vaccine exemptions, thrusting the state into the role of the autism capital of America.

No doubt there’s some California bureaucrat ready to sell more government debt bonds to fund an “autism jobs creation program” that would hire the new wave of autistic children to spray paint lawns green. This, of course, would be proposed as an example of the government’s amazing compassion for children — the same children the government is poisoning with toxic vaccines.

Welcome to Fakifornia, where the green lawns are fake, public education is fake, medical “science” is fake, the right of a woman’s medical choice is fake, the state budget is fake, the Hollywood faces are fake, the news is fake and the factory foods sold at the grocery store are fake.

There are a lot of amazing, REAL people in California — many of whom are my personal friends — but even they are getting fed up with the fakery and looking for exits.

Related:  What's coming? Californians told to stay within 120 miles of their residence

That’s why I am now publicly predicting a tidal wave of medical police state refugees and drought refugees fleeing California in search of water and dignity.

California is on the verge of ecological collapse, fiscal collapse and a massive collapse of the public trust in failed government. You would all be wise to watch this from afar rather than being stuck in the middle of it when all the fakery hits the fan. If you live in Collapsifornia right now, pick up your feet and scoot!

As a friend of mine is fond of saying, “When the s#!t hits the fan, try not to be standing in front of the fan!”

Dutchsinse: We have a new hotspot on the side of the supervolcano

What’s coming? Californians told to stay within 120 miles of their residence

Baby dolphin pulled from waves killed by humans after they passed...