Google discarded 9% of the 235,000,000 allegedly infringing links copyright holders asked the company to remove from its search engine this year. This amounts to 21 million URLs for which Google took no action, either because the requests were illegitimate or were duplicates already submitted in previous notices. NBC Universal, Fox and Lynda.com have the worst track record in this regard as more than a quarter of their requests were discarded.

Since last year copyright holders have started to increase the number of DMCA takedown requests they send to Google.

In 2011 Google was asked to remove less than 10 million links from its search engine, which quickly grew to more than 50 million last year. In 2013 the notices nearly quintupled again, and at the time of writing Google has been asked to remove more than 235 million URLs.

TorrentFreak decided to take a closer look at all these requests, and we can report on some rather interesting findings concerning the volume and accuracy of the DMCA notices sent by various copyright holders.

The music industry has been most active by far, with the anti-piracy groups BPI and RIAA sending in removal requests for 41.7 and 30.8 million links respectively. Twentieth Century Fox, Froytal Services and Microsoft complete the top five with 19.3, 19.2 and 10.4 million allegedly infringing URLs.

Sheer volume aside, one of the most striking findings is that Google took “no action” for roughly 9% of all takedown requests this year, which equals 21 million URLs. This number includes both inaccurate takedown notices as well as duplicate URLs which have been already taken down.

The most takedown requests for which “no action” was taken come from the BPI. Google discarded over 520,000 links sent by the music group, which is 11% of the URLs they submitted this year.

Of all copyright holders who submitted more than 1 million URLs, Lynda.com takes the crown when it comes to the highest percentage of discarded takedown requests. Google took no action for 57% of the 1,178,809 URLs the company sent in.

NBC Universal and Warner are runners-up in the worst performer category, as Google discarded 28% and 25% of their notices respectively. 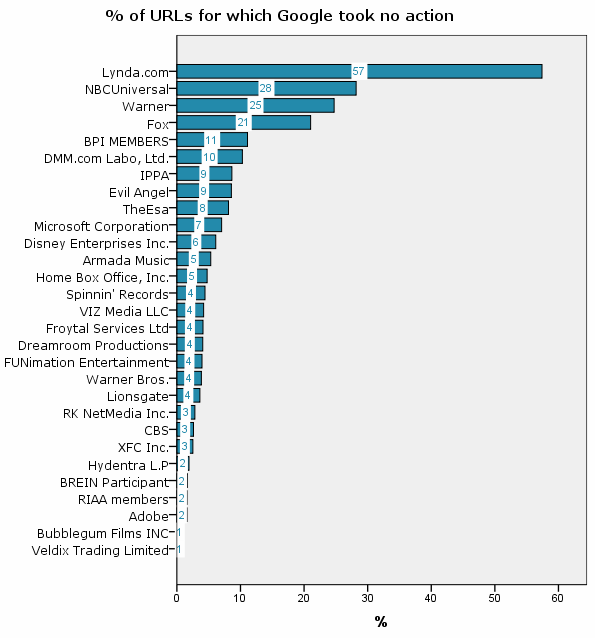 Luckily, there are also copyright holders with a much better track record. The RIAA, Adobe and BREIN perform relatively well, for example, with Google discarding only 2% of their takedown notices.

Behind the scenes Google is keeping a close eye on the results for which they take “no action,” in particular the ones where copyright holders are abusing the system.

“We still do our best to catch errors or abuse so we don’t mistakenly disable access to non-infringing material. Google continues to put substantial resources into improving and streamlining this process, including into identifying erroneous and abusive takedowns, and deterring abuse,” Google told us previously.

Copyright holders, on the other hand, believe Google should also be more proactive when it comes to infringing sites. For example, the RIAA previously asked Google to start banning entire domains from its search results.

“Every day produces more results and there is no end in sight. We are using a bucket to deal with an ocean of illegal downloading,” Brad Buckles, RIAA executive vice president of anti-piracy complained earlier.

It will be interesting to see how the tension between Google and the copyright holders develops in 2014, and whether the volume of DMCA requests will quintuple once again.