Editor’s Note: As you read the following detailed report from Holly Deyo of the Millennium Ark and DareToPrepare.com keep in mind that nearly twenty years ago the government and their scientific propaganda mechanism made it a point to tell Americans that the New Madrid Seismic zone was safe – that there was no threat to the population whatsoever. Now, a couple of decades on, new research proves that they clearly fabricated their results and analysis, putting millions of unassuming Americans at risk. Today, the governments of Japan and the United States are saying the same thing about the Fukushima nuclear disaster, which begs the question: How much do you trust your government? Given the details shared by Holly below, the answer should be crystal clear.

Almost two decades ago, I wrote in Dare To Prepare about dire consequences from mega-quakes in the New Madrid Seismic Zone. After Dare To Prepare’s 1st Ed. was published, scientists retracted their worries and pronounced the New Madrid area ‘dead’. It was safe. What a different tune they’re singing now.

“Previous studies have suggested that it may be shutting down, based on GPS readings that showed little strain accumulation at the surface. Other research came to the same conclusion by blaming ongoing quake activity on aftershocks from the 1800s, which would essentially relieve strain on the fault.

“The latest study suggests otherwise. Hough and USGS geophysicist Morgan Page in Pasadena, Calif., analyzed past quakes in the New Madrid region and used computer modeling to determine that the continuing tremors are not related to the big quakes two centuries ago. 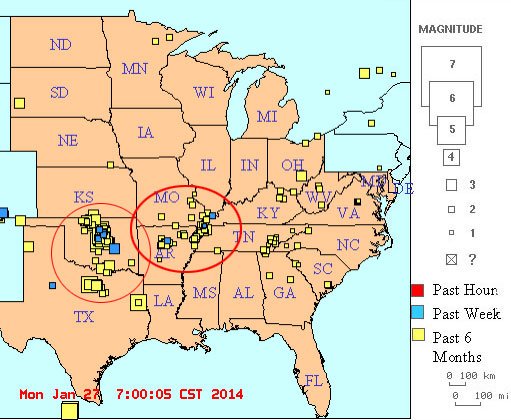 Now, 16 years later they admit – in a 180º retraction – this whole area of the Midwest is not only active, but quakes here can have potentially catastrophic results.

Image above right: The New Madrid Seismic Zone encompasses the thicker red ring on the right. However, looking at the pattern of quakes over the past 6 months, a megaquake could also take in portions of Oklahoma and maybe Texas.

Anyone who follows government pressers, which passes as news, knows we are at risk because of their tight lips, subterfuge, nuance and frankly stated, back-side kissing. Their urging is to conceal truth lest everyone panic. No one wants to be held accountable for killing economies (it’s better to kill people), let alone spark riots. The latest edition of Prudent Places USA shows the New Madrid quake area is a bomb waiting for its fuse to be lit. 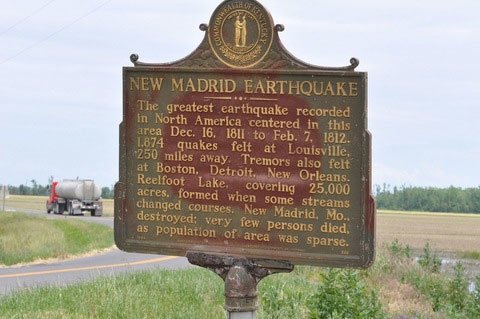 Image: No one should live with 200 miles either side of this fault zone including all up and down the Mississippi River from Illinois to Mississippi and from Arkansas and Missouri to Ohio and Tennessee, and regions in between(see map below).

Though these previous 5 mega-quakes damaged property and land primarily from Arkansas north into Illinois, America has built up massively and continuously over the intervening 200 years. It puts many more Americans at risk than in the early 1800′s. In the mega-quake’s aftermath, people in outlying areas will be run over by those seeking shelter and medical aid in addition to food, water and all other life-saving necessities. Sum it up in one word: pandemonium.

Denial is a comfortable pipe to smoke. We think it will never happen to us: whether it’s hurricanes, cancer, riots, tornadoes, market crashes or bone-crushing, unsurvivable weather. It’s human nature to be complacent. Yet some people have listened and moved to safer places.

Let the author state at this point, there is no safe place without Christ, yet there are more intelligent, less life-threatening places to live. God doesn’t expect us to stay stupid… especially if we have knowledge and do nothing.

ALL of our Countrymen in this beautiful Nation are being sacrificed for everything P.C. Where else are more people trying to tune in, yearning to learn, yet stymied by MSM (mum-stream media)? 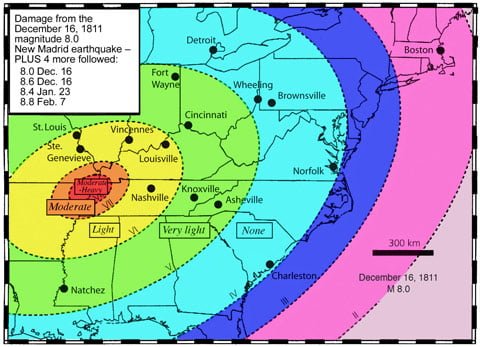 It’s easy to forget imperative, yet quietly-stated news bulletins. It’s not your fault. Not really. There is a conscious effort of drip-drip-drip media to say it, yet not say it. News in dribs and drabs has little punch. It sticks nowhere between the ears. But once you have the seeds of knowledge, it is yours to pursue. It is incumbent on you to act, to protect you and your family. No one in mainstream wants to be accused of blowing Draino at us and scald our fear sensors unnecessarily. Media must, and does, openly support Obama and prints little information of value in order to maintain White House access.

It’s not just Obama, but it’s worse with O. This includes both Bushes, Billy Boy Clinton, and certainly the silly peanut farmer, clear back to at least Warren Harding. That was nearly 100 years ago. Whatever happened to Obama’s statement that he will have the most transparent government ever? What rubbish! Obama is interested in one thing – his legacy, which was to be ObamaCare, but even the dullest cretin can see this is a screw-up of magnificent proportions. It’s all status, recognition – and of course, a paycheck. News agencies want to be ALL THAT without exposure, without consequence, while puckering their toady lips on Obama’s backside. So they feed us pro-Obama garbage and pabulum ‘news’.

Scripture warns, you can’t have 2 feet planted in different fields. You’re either for Christ or against him. You either serve mammon (money) or God. You either serve liars, or have courage so speak truth. There is no half-pregnant scenario here. So consider where media lies.

Now flashback to vital news items from the last several years to see a disturbing picture.

Remember the extraordinary number of dead body or cremation containers stored in Atlanta? Trainloads of these were filmed. After exposure by alternative media, where did they go? Check here. In the picture below, I counted at least 6,800 containers – 5 rows, 17 high and at least 80 in each row. (I went blind at this point… <sigh>, maybe there were more. This was just one location.

(Image credit Before It’s News and Sherry Questioning All)

Now factor in an astonishing 140 million food packets and body bags purchased by FEMA in early 2011.

Bullets bought by government agencies number in the hundreds of millions – no, in the Billions. FEMA, Social Security, ICE,TSA, USDA, NOAA, (what does food and weather have to do with this?), Dept. of Homeland Security and here and here – all jumped into the purchasing frenzy. This is nonsense.

Last year FEMA requisitioned millions of meals for areas bordering the New Madrid, where people will likely flee when there is no food, no water, no services and no help.

There is an agenda here that doesn’t bode well for Americans. The picture is unmistakable. We are being quietly led to slaughter and unless we wake from our collective deep sleep and refuse to be willing participants in our destruction.