Forgive me for butchering the pronunciation of tonteldoos in my video below. No matter how it’s spoken in Afrikaans, this portable tinderbox just became my favorite fire-starter for spark ignition fires. Simple, yet effective!

Tonteldoos is a small town in South Africa who’s name actually means tinderbox. Information on the traditional tinderbox itself was a bit scarce as I researched. I was fortunate enough to find a description of a tonteldoos in a Facebook learning group shared by a gentleman (Eben) raised in South Africa. I built mine based on his helpful instructions.

Thank you, Eben, for sharing some history and the idea of making this pocket tinderbox!

The tonteldoos was introduced in South Africa by European settlers in the 17th century. The tinderbox was an effective and portable method of creating fire up until the introduction of stick matches in the mid 1800’s. As wars tend to do, the Anglo-Boer war (1899-1902) created a scarcity of stick matches causing people to revert back to the traditional tonteldoos to start fires in homes and afield.

Even after the war ended and matches became widely available, the use of this traditional tinderbox continued through to the mid 20th century. Testing my pocket tonteldoos, I can certainly see why. It’s easy to make, easy to use, and employs one of man’s time-tested ignition sources – flint and steel.

Consistent ignition with flint and steel requires a dry source of charred material. Once the material catches a spark, the glowing ember is placed in a tinder bundle and blown into flame. With marginal or damp tinder, I’ve gone through several pieces of char from my fire kit before reaching ignition temperature.

This pocket tinderbox offers a controlled solution to eating up all your charred material. Here’s how…

With the tonteldoos, the only material consumed is at the end of the tube. The remaining un-charred material is preserved within the cylinder. Saving this valuable next-fire resource is the smart move.

By far, the best results came from charring the end of the material (method #2).This is the traditional method used for tonteldoos.

Method #1 failed, as I suspected, due to the fragile nature of charred material. It’s difficult to push crumbly material through a tube without turning it to dust. The charred rope provided an awesome glow but was consumed too quickly.

After reading Eben’s description, my possum mentality kicked in as I walked to my shop. I needed a metal tube and cotton material. I considered using a small, gutted Maglite but the diameter would not allow me to push the material up with my finger. The same goes for 1/2 inch copper pipe unless you’ve got really skinny fingers.

I dove into my scrap copper from previous plumbing jobs. If you don’t have copper lying around, home improvement stores sell all you need.

Here’s what I came up with for my tonteldoos…

Cut a 4 inch section of 3/4 inch pipe. Ream each end of the pipe with the attachment on the pipe cutter – or use a file. This removes burrs from snagging the cotton material as it passes through the pipe.

Any 100% cotton material would probably work. I had a new industrial mop head lying around I had intended to use as char rope. Perfect!

Cut several strands off a mop head and feed them through the pipe with a twisting motion until 1/4 inch of material is sticking out of the top end of your cylinder. Let the bottom end run wild. You can remove the excess later. 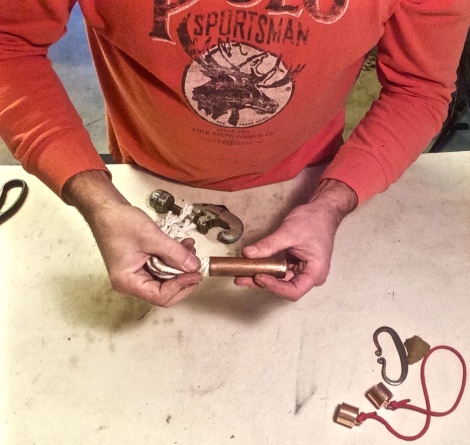 Char the 1/4 inch of material with an open flame. I used my new Mullein Slush Lamp… just because! Any open flame will do.

This is completely optional. I added loops to my caps for three reasons…

If the end caps fit loosely, tweak the pipe ends by lightly tapping them with a hammer to take them out of round. Not too much or your cap won’t fit (square peg in a round hole). Another way to tighten the cap connection is to solder the caps on and then remove them. The layer of solder would make the caps fit tightly once cooled.

Or just tie them securely with a blood knot (how to tie a blood knot video here) as mentioned in #3. For this part, you’ll need a loop on each end cap…

Drill two holes in each cap the diameter of a piece of copper wire. I stripped a section of scrap 12 gauge wire to form my loops. Needle-nose pliers are most helpful for this task. I opted not to solder the wire inside the cap since bending them down inside each cap held the loops in place securely.

How to Use Your Tonteldoos

As with any charred “next-fire” material, keep the tonteldoos in a dry place in your haversack or fire kit. I keep a couple of pieces of chert/flint inside my square tinderbox (pictured below) with other charred material and finely processed tinder material. The tonteldoos fits perfectly inside this large tinderbox.

To ignite the charred end of the tonteldoos, push the wick from the tube bottom with your finder so that 1/8th inch of the charred wick is exposed. Hold the cylinder in your non-dominant hand with your pinky and ring finger. Hold a sharp piece of chert/flint between your thumb and pointing finger. The tinderbox should be below the flint so the sparks have a better chance of landing on the wick – unlike the photo below.

Strike down lightly and repeatedly over the edge of the sharp stone so that sparks are produced and hopefully land on the charred end. The tiny shards of metal oxidize and spontaneous combust to produce 800 degree sparks hot enough to create a glowing ember on the charred wick.

Once a spark finds its mark, a glowing ember appears. Blow the ember to spread the glow over the end of the wick.

Of course, you’ve prepared fine to course tinder material beforehand and shaped a stellar tinder bundle (a.k.a. – birds nest). I use two methods to ignite tinder bundles with my pocket tondeldoos.

First, place the glowing end of the wick directly into the finest part of your tinder material and blow to ignition. Be sure to push the wick out of the tube a bit so as to make good contact with the fine tinder.

The other method is to use the glowing end of the tonteldoos to ignite a fire extender like punk wood, black sooty mold, etc., etc. Then place the fire extender in your bird’s nest and blow it to flame.

If you want a portable, long-lasting, reliable source of char for flint and steel ignition, give the tonteldoos a try. I think you’ll be pleased.

Be sure to let us know your results and any other creative ideas to build one.

P.P.S – If you find value in our blog, Dirt Road Girl and I would appreciate your vote on Top Prepper Sites! You can vote daily by clicking here or on the image below. Check out all the other value-adding sites while you’re