I’m always amazed at how people can be programmed by the mainstream media to ignore the obvious reality happening right in front of their eyes. Right now, America is being lulled into a hypnotic sense of denial while military training for martial law is happening right in their own neighborhoods and city streets. Yet, strangely, no one is allowed to refer to this exercise as training for martial law… even though that’s obviously what it is.

Most Americans remain totally unaware of the fact that a massive military drill spanning 10 U.S. states will soon put military troops, helicopters, armored transports and military weapons directly on the streets of communities across the nation. “Operation Jade Helm begins in July and will last for eight weeks,” reports the Daily Mail. “Soldiers will operate in and around towns in Texas, New Mexico, Arizona, California, Nevada, Utah and Colorado where some of them will drop from planes while carrying weapons loaded with blanks in what military officials have dubbed Realistic Military Training.”

The military drill labels Texas and Utah “hostile territory,” where military special ops personnel are supposed to try to covertly move among the public, undetected. As reported in the Houston Chronicle:

“They’re going to set up cells of people and test how well they’re able to move around without getting too noticed in the community,” said Roy Boyd, chief deputy with the Victoria County Sheriff’s Office. “They’re testing their abilities to basically blend in with the local environment and not stand out and blow their cover.”

Operation Jade Helm is fully described in this unclassified document which was first publicized by InfoWars and All News Pipeline. Both sites were heavily criticized for suggesting this martial law drill was a martial law drill… in precisely the same way anyone who says the stock market reflects a massive bubble is also heavily criticized even though the stock market, indeed, reflects a massive bubble (it is wildly overvalued thanks to the Fed’s money creation schemes).

It is notable in America that Brian Williams, the discredited NBC news anchor who lied to the world about his fictitious journalism escapades, was suspended for six months for lying. Had he been caught telling the truth about the real news, however, he would have been fired for life.

In America today, no truthful analysis or reporting is allowed on any subject that really matters, and the primary function of the news media is to conduct elaborate theater that distracts people from the real world happening around them. Part of this effort involves programming people to psychologically delete from their awareness things which are happening right in front of them. (Is this really possible? Absolutely. Read about the invisible gorilla on the basketball court experiment in which people fail to see a gorilla right in front of them…)

“Covert warfare coming to Texas sparks some fears of federal takeover,” reports the Houston Chronicle. And InfoWars.com, which has been digging into this story better than any other news outlet at the moment, has even more to report. As the Daily Mail recites:

[Alex Jones] warns that Jade Helm is simply ‘an effort to test the effectiveness of infiltration techniques’ on the American public.

‘They’re having Delta Force, Navy SEALS with the Army trained to basically take over,’ Info Wars’ Alex Jones said Sunday. ‘Texas is listed as a hostile sector, and of course, we are…We’re here defending the republic.’

Stripes.com predictably calls any concern about the martial drills “alarmist” and insists this is all about national security. “This exercise is routine training to maintain a high level of readiness for Army Special Operations Forces because they must be ready to support potential missions anywhere in the world on a moment’s notice,” USASOC spokesman Army Lt. Col. Mark Lastoria said as reported by Stripes.

Stripes, however, does not explain the peculiar choice of training grounds for the military: the streets, parks and properties of towns and cities across America. Since when did the military declare your local community a covert ops training theater for armed soldiers and war equipment?

As you can see from the still photos taken from the video, soldiers equipped with night vision gear and rifles are now on the streets: 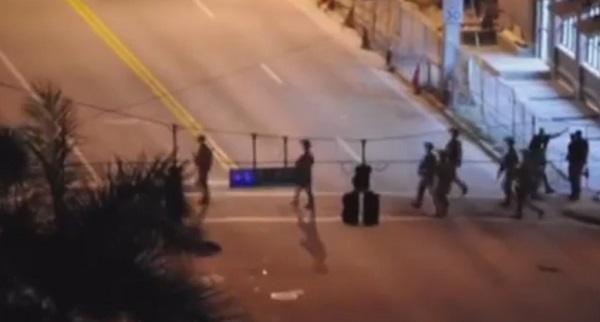 In this apparent martial law training drill caught on video, “arrested” citizens are rounded up and forced to march single file, led by an armed soldier with night vision gear and a rifle. This marching arrangement is exactly the way prisoners of war are marched into prison camps in a war scenario: 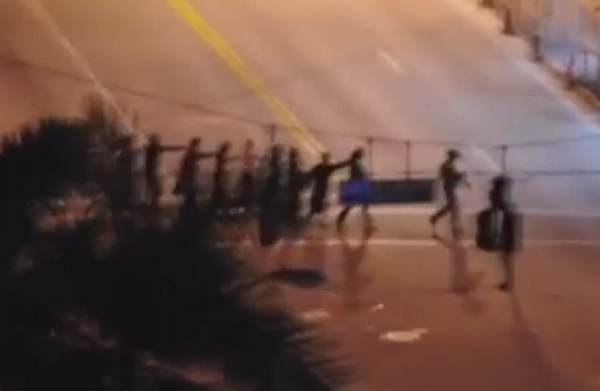 Here, soldiers are practicing arresting citizens at gunpoint after throwing them to the ground: 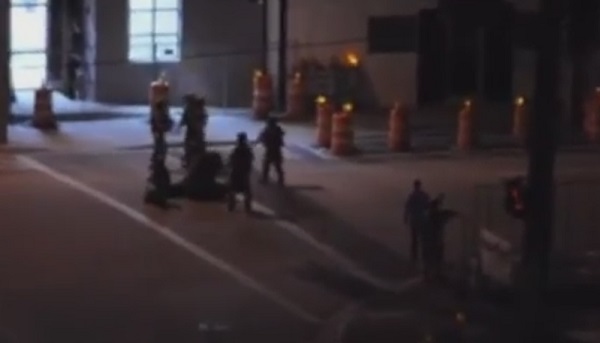 Apache helicopters are conducting landings and takeoffs right in the middle of the city: 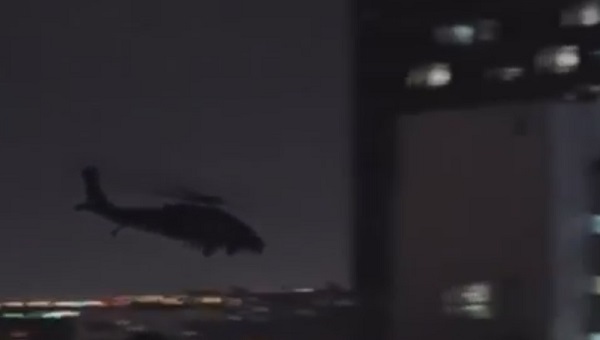 A partial squad of soldiers patrols the street as part of the round-up “practice arrest” of citizens: 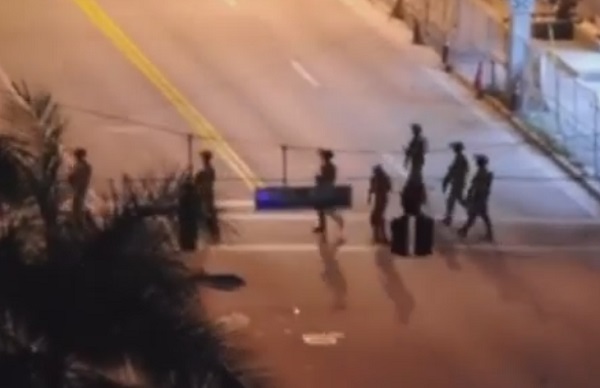 Reality check: This would be called a “martial law drill” in any other nation

Let’s step back for a minute and ask the question of how the U.S. press would report on exactly the same military operations if they were taking place in a nation like Russia.

Suppose Russia decided to deploy soldiers, helicopters, tanks and covert operations units in the border near Ukraine, or Georgia or anywhere that it might currently label “hostile territory.” The deployment of military personnel in civilian areas to conduct operations in the very back yards of everyday citizens would likely be condemned by the U.S. State Department as a “form of military intimidation of the population.”

If North Korea, China or Pakistan conducted a Jade Helm military drill in their own civilian cities and towns, such activities would be immediately and accurately seen by the West as drills for military-enforced martial law.

But when such drills take place in America, any person who points out the obvious intent of the activity is immediately branded a lunatic. When martial law military drills happen in the United States, we’re told, they really aren’t martial law military drills at all. Nope. You’re just imagining that you’re seeing armed soldiers with night vision gear conducting mass arrests of citizens on the streets of America. (You’re not supposed to see the gorilla standing right in front of you…)

But is it really crazy to point out that the military has no need whatsoever to train among civilian populations unless that same military plans to engage those civilians in a martial law scenario? After all, how is this training more “realistic” if the populations being targeted in the training aren’t in the crosshairs of some future planned military action?

The idea that training among small towns in the USA is supposed to provide “realism” for operating in Afghanistan or Iraq is utterly absurd. For one thing, small towns in America don’t have teams of local rebels setting up roadside IEDs to destroy humvees and their occupants. Special Forces operatives are more likely to encounter people hurrying their way to Starbucks than trying to run any sort of armed resistance actions.

Even worse, this idea that U.S. military special forces operatives are supposed to be sneaking around small towns in Central Texas is almost begging for an escalation of potentially violent conflict with private ranch owners, most of whom are well armed and constantly dealing with illegal immigrants trespassing and stealing valuables from their property.

The staging of military drills in rural Texas seriously concerns me. Although no Texas rancher would knowingly open fire on U.S. soldiers — Texans are generally very supportive of the military and especially of veterans — don’t the Pentagon’s covert activities raise the risk of a friendly fire shooting incident in places like rural Texas where a squad of soldiers might be mistaken for an armed gang of thieves?

As a simple matter of fact, Texas ranch owners don’t take kindly to strangers tromping across their fields in the middle of the night. Are special forces soldiers seriously going to move cross country through Central Texas, across private ranches in the middle of the night, in firearms range of private property owners who are already have itchy trigger fingers due to the illegal immigration crime wave that’s threatening them?

The Pentagon’s choice of central Texas as a covert ops training ground seems to be extremely irresponsible and possibly even intended as a provocation of either accidental friendly fire or direct hostilities between rural Texans and the U.S. military. Anyone familiar with Texas culture can’t help but realize the active labeling of Texas as “hostile territory” appears to be a deliberate attempt by the Pentagon to provoke such hostilities in Texas and possibly use such provoked hostilities to justify a heightened military presence in the targeted areas.

A violation of U.S. law

Anyone who thinks the U.S. military is training in Bastrop, Texas so that they can fight enemy insurgents in Fallujah is failing to see the gorilla in the room. Operation Jade Helm is, without question, an illegal martial law drill intended to prepare the troops for deployment against civilian populations in America. Its very existence is a direct violation of the Posse Comitatus Act which prohibits the U.S. military from functioning as domestic police.

My analysis? This looks very likely to be part of military readiness training for the social chaos that’s likely to follow the inevitable global debt collapse. Come to think of it, when all that hits the fan, you and everybody else will probably BEG the military to take control of the cities and quell the rioting that’s sure to follow.