Note to Readers 4-25-2015: If you came to this page from the Chron.com article you should know that our website itself did not say the things we are quoted as saying, rather it was an opinion piece by ONE WRITER that appeared on our site. This is equivalent to The New York Times editors and owners being quoted as believing everything in their opinion pages. (something that would never happen) The corporate media always try to attack and marginalize sources outside the mainstream and this is a perfect example.

By Susan Duclos | All News PipeLine

After her initial video revisiting the massive underground tunnel systems throughout the United States and connecting them to the recent bizarre announcement by Walmarts in Jade Helm states, YouTube videographer Rise Together decided to start following links left in her comment section, which led her to a variety of sites, images and forum discussions where dots connect everything from the Denver International Airport to the Mantauk project to recent day headlines on Jade Helm, leading to a number of questions.

Are these closed Walmarts being refitted to become the hubs, so to speak, or processing centers before allowing access into the tunnels? Is it a coincidence that the majority of closed Walmarts are in Jade Helm states or states that have recently had or are expected to have massive military training exercises?

For those unaware of what Jade Helm is, reference the March 13 article by Stefan Stanford which has the leaked planning documents embedded for the whole story, but as a short explanation from that piece”

“From July 15th to September 15th of 2015, the US Army’s Green Berets, US Navy Seals, US Marines Special Ops Command and US Air Force Special Ops Command will be taking part in ‘Jade Helm 15’, 8 weeks of night time drills in 7 states in the southwestern portion of America in which the states of Texas and Utah are both labeled ‘hostile’ territory in the ‘drills’ as outlined in more detail in the US Army Special Ops Command documents.” (SEE EMBEDDED DOCUMENTS HERE)

Everyone reading this is encouraged to click the links provided, research them and make their own determinations.

The maps below show the locations of the Walmarts that announced the sudden closings all of which cited the reason as “plumbing issues.” A map of the underground tunnel systems specifically showing the entrances and then an overlay of the Walmart stores that have closed with secret government facilities and the Deep Underground Military Bases (DUMBS).

All photos from Rise Together/YouTube. 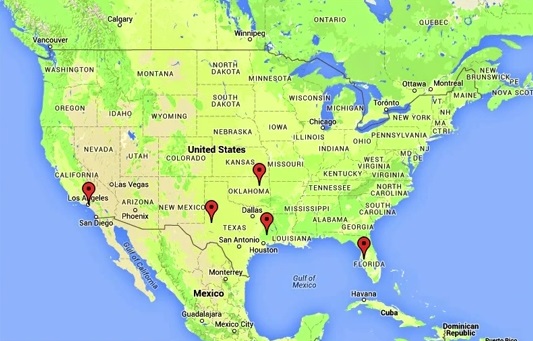 (Locations where Walmarts are closing) 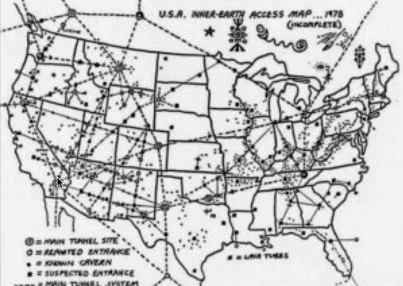 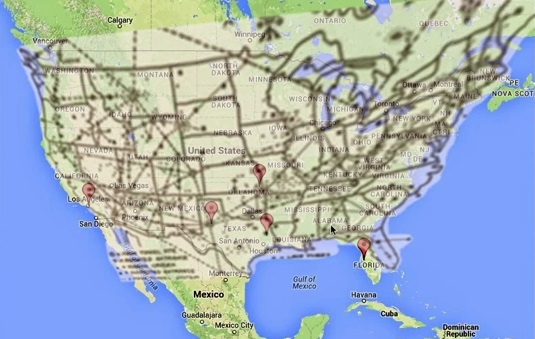 The first site we are brought to is an outdated page, found through archives, which is titled “Tunnels of Paulding County Investigation,” which states the following:

In order to further protect the homeland and ensure the safety of it’s citizens in case of nuclear, biological, or chemical attack, a joint venture of the NSA, DOD, MiB, DHS, CICs, DFCS, and BK has been created in order to create an expansive tunnel system throughout the south. These tunnels will also serve as conduits for national defense to rapidly move troops, supplies, and armor throughout the nation between strategic topographical locations.

Rise Together follows the first link on that archived page to older discussions about the ongoing construction of these tunnels, then she highlights a video where Phil Schneider, who claimed to be an “an engineer who had been involved for many years working in construction for the Industrial Defense Complex building giant “Deep Underground Bases.” Specifically connecting these systems to Denver International Airport. A clip from a statement by Schnieder asserts there are at least 131 DUMBS in the United States and over 1,400 worldwide.

Schneider died in 1996, apparently from a stroke but at the time his ex-wife claimed he was murdered for exposing government secrets. (More on that here)

The forum discussion is from 2004 and the very first entry is a synopsis on what was discovered about the project at the time, read the entire thing, but quoted below is the portion that references the government’s plans for certain Walmart locations:

After the budget was passed, the skies over Paulding were inundated with helicopters from the Army Corps of Engineers & others doing aerial surveying & topographical mapping. It was confirmed what was already known & the tunneling project began immediately in Yorkville about a year ago. Many of our neighbors (including my parents, Firewalker, & others) have been approached by some gov’t types & ordered to either stay away from the project or sell out. Many of these folks have sold & the land was purchased by various gov’t agencies, usually very quickly.

The Walmart that will be going in on HWY 120 is supposed to be the first in the series of staging areas. It was chosen because of its central location to the entire project & the main hub designated for Yorkville. As new Walmarts are built, more staging areas will be added to each new store as well as to existing Walmarts. These stores have extremely large parking areas & that means the various gov’t agencies can use these facilities to move large equipment rapidly, especially to & from Lockheed. The Homeland Security use is just obvious — ability to move large numbers of troops & high ranking officials in a moments notice while unhindered by traffic & other logistical problems.

The blasting that is being done now has been felt & heard by several Paulding residents, including some minor basement damage to some homes. The project must be moving along rather rapidly since the trucks are working 24/7, including weekends. According to Mr Chairman (Click here for his quote) , the project is moving quite well & anticipated to be saving quite a bit of the county’s money. The intent, of course, is to use the general aviation airport here in Paulding as part of the “rapid response” program for the Homeland Security Agency, among other gov’t groups.

In the two videos below, Rise Together walks us through some of the other discussions on the forum, the connections with Walmart and these DUMBs, the Denver International Airport, and much more.

With all the concern of the nature of the Jade Helm military training exercises, to which one 28 year veteran, Roy Potter called “unprecedented and dangerous,” in connection with these underground tunnels, locations and timing of the sudden Walmart closures, we ask if these specific Walmart locations are going to be used as “command centers” for the US government and NWO underground operations?

One last question would be if accelerated work on these underground tunnel systems have anything to do with the unexplained booms that have been reported more and more frequently of late?

Note to readers We are asking questions because in the absence of government transparency, where official explanations do not address the concerns of those disturbed by recent events, it is up to the people to dig, to bring any and all information to light, and to attempt to connect the dots.

This article originally appeared on All News Pipeline