Pew’s more thorough poll does alert us to the fact that a majority of the population is either ambivalent to the NSA’s actions — or completely unaware. Only 27% of respondents claim to be following the story closely, with those polling as opposed to the NSA’s data harvesting holding a slight lead over those who support these efforts.

Results of a recent survey have just been released by the Pew Research Center and its discoveries are a bit surprising and a bit disappointing. After seeing a large surge in the percentage of people who were unwilling to sacrifice more civil liberties to fight terrorism (last month’s post-Boston Bombing TIME/CNN poll), today’s poll release swings back in the other direction. According to Pew’s poll, a majority of Americans think the NSA’s phone records dragnet is perfectly fine in the context of fighting terrorism. 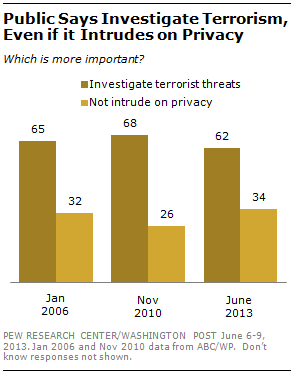 A majority of Americans – 56% – say the National Security Agency’s (NSA) program tracking the telephone records of millions of Americans is an acceptable way for the government to investigate terrorism, though a substantial minority – 41% – say it is unacceptable. And while the public is more evenly divided over the government’s monitoring of email and other online activities to prevent possible terrorism, these views are largely unchanged since 2002, shortly after the 9/11 terrorist attacks.
Currently 62% say it is more important for the federal government to investigate possible terrorist threats, even if that intrudes on personal privacy. Just 34% say it is more important for the government not to intrude on personal privacy, even if that limits its ability to investigate possible terrorist threats.

While it’s tempting to believe a large number of Americans simply haven’t been paying attention for the last 11 years, the more probable explanation for the consistent support of government monitoring is the hypocrisy of partisan politics. Republicans and Democrats have shown their support of government surveillance is directly tied to whoever’s currently in the White House. 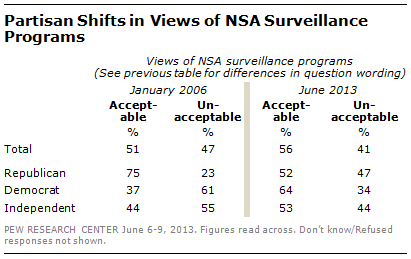 Republicans and Democrats have had very different views of the two operations. Today, only about half of Republicans (52%) say it is acceptable for the NSA to obtain court orders to track phone call records of millions of Americans to investigate terrorism. In January 2006, fully 75% of Republicans said it was acceptable for the NSA to investigate suspected terrorists by listing in on phone calls and reading emails without court approval.

Democrats now view the NSA’s phone surveillance as acceptable by 64% to 34%. In January 2006, by a similar margin (61% to 36%), Democrats said it was unacceptable for the NSA to scrutinize phone calls and emails of suspected terrorists.

There, in bold black and white, is one of the most damning indictments of the two party system and its attendant illusion of choice. Two different parties in control. Same outcome. The only thing that changes is the party affiliation of the indignant. Oddly, “Independents” have increased their support of surveillance programs over the same period, a stat that serves as a reminder that it’s not just libertarians self-identifying as independent.

On a slightly more positive note, Americans are more protective of their internet usage, with a slight majority (52%) saying the government should not be allowed to monitor email and “other internet activities” in order to track down terrorists. Sadly, this too can probably be chalked up to a change in presidents, with Republicans jumping 13% in their disapproval from 2006 to 2013 and Democrats dropping their disapproval 8% over the same period.

But perhaps the largest factor is the phrasing of the questions. A Rasmussen poll conducted during the same period came to nearly the completely opposite conclusion.

Most voters oppose the U.S. government’s secret collection of the phone records of millions of Americans and think the feds are spying too much on U.S. citizens these days. Just 26% of Likely U.S. Voters favor the government’s secret collecting of these phone records for national security purposes regardless of whether there is any suspicion of wrongdoing. The latest Rasmussen Reports national telephone survey finds that 59% are opposed to the practice.

It appears as though certain words — like “terrorism” — tend to trigger more supportive answers.

The federal government has been secretly collecting the phone records of millions of Americans for national security purposes regardless of whether there is any suspicion of wrongdoing. Do you favor or oppose the government’s secret collecting of these phone records?

Both questions have their own tilt. Pew uses the word “terrorism,” which tends to provoke stronger emotional responses. It also gives the NSA’s action an overarching purpose where Rasmussen’s wording places more emphasis on secrecy and the lack of reasonable suspicion inherent in the NSA’s data harvesting. Rasmussen skews things even further in other questions, including this one, which presents only one “correct” answer (logically).

Is the U.S. government spying too much on Americans these days, not enough or is the level of spying about right?

Where does the public’s opinion actually lie? It’s tough to say as both polls use language which could skew results. A certain percentage of Americans are willing to accept rights erosion in exchange for fighting terrorism. Legislators still exploit this angle to push through questionable bills and excuse existing policies. Rasmussen’s question exchanges “terrorism” for “national security,” a term that doesn’t have nearly the same emotional impact. Two very different outcomes to ostensibly the same question.

Pew’s more thorough poll does alert us to the fact that a majority of the population is either ambivalent to the NSA’s actions — or completely unaware. Only 27% of respondents claim to be following the story closely, with those polling as opposed to the NSA’s data harvesting holding a slight lead over those who support these efforts.

This low level of engagement isn’t uncommon and has helped to ensure that questionable Bush-era policies remain in place years down the road, in some cases being expanded by the current administration. Hopefully, this latest round of leaks will grab the attention of more of the population and bring with it some much-needed transparency and change within the system.