Titled “The United States vs You (and Kim Dotcom)” and written by Megaupload lawyers Ira Rothken and Robert Amsterdam, the paper accuses the Obama administration of being a pawn of big corporations.

Megaupload’s legal team are not restricting their fight with the U.S. Government only to the courts. Today they published a detailed white paper accusing the White House of selling out to corporate interests, particularly Hollywood. “The message is clear. The White House is for sale. More and more of our rights are eroding away to protect the interests of large corporations and their billionaire shareholders,” Dotcom summarizes.

“The Truth will come out.”

Megaupload founder Kim Dotcom has been announcing it for months on his website and a white paper released today is the first big step towards that goal.

Titled “The United States vs You (and Kim Dotcom)” and written by Megaupload lawyers Ira Rothken and Robert Amsterdam, the paper accuses the Obama administration of being a pawn of big corporations. It further describes in detail how the authorities obliterated Megaupload on flaky legal grounds.

“The message is clear. The White House is for sale. Due process and the rule of law have little value to the current administration. More and more of our rights are eroding away to protect the interests of large corporations and their billionaire shareholders,” Dotcom tells TorrentFreak.

According to Dotcom his case is just one example of how corporate interests threaten people’s rights and freedom on the Internet in general.

“Silicon Valley has been turned into Surveillance Valley. Kids with keyboards are the new terrorists. Copyright is now a matter of national security. This is all very un-American. Read the White Paper and wake up.”

The 38-page white paper starts with a bang:

“The criminal prosecution of Megaupload and Kim Dotcom is purportedly the ‘largest copyright case in history,’ involving tens of millions of users around the world, and yet it is founded on highly dubious legal principles and apparently propelled by the White House’s desire to mollify the motion picture industry in exchange for campaign contributions and political support,” the white paper begins.

One of the main complaints against the legal process is that under U.S. law Megaupload and its employees can’t be held criminally responsible for copyright infringements committed by the site’s users.

“The prosecution seeks to hold Megaupload and its executives criminally responsible for alleged infringement by the company’s third-party cloud storage users. The problem with the theory, however, is that secondary copyright infringement is not – nor has it ever been – a crime in the United States.”

“The federal courts lack any power to criminalize secondary copyright infringement; the U.S. Congress alone has such authority, and it has not done so. As such, the Megaupload prosecution is not only baseless, it is unprecedented,” Rothken and Amsterdam write.

The paper continues to give a detailed overview of legal jurisprudence in Megaupload’s favor. Among other things, the lawyers note that Megaupload granted very broad DMCA takedown powers to copyright holders, who could remove any file from the cloud hosting service without oversight.

Most of the legal arguments laid out in the white paper have been highlighted previously. What is new, however, is the legal team’s frontal attack on the Obama administration. The suggestion is, that the White House has been corrupted by corporate money and that the assault on Megaupload was a payoff.

“The degree to which the Copyright Lobby, and the MPAA specifically, have managed to instrumentalize the current Administration to take down a foreign corporation and its executives is, quite literally, un-American,” the lawyers write.

Corrupted by sizable election contributions from corporate interest groups, the United States no longer stands for principled standards and the rule of law, the lawyers argue.

“Those values appear to have fallen by the wayside under this White House, which seems content to violate the due process rights of criminal defendants, mislead the courts, and advance baseless legal theories so long as its fund-raising remains uninterrupted.”

The Truth Will Come Out 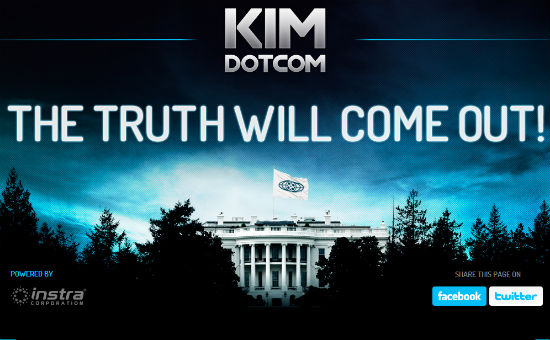 Megaupload’s lawyers see the MPAA as the driving force behind the criminal prosecution of the cloud hosting site and its employees. According to them, it is no coincidence that the Hollywood group is headed by former Senator Chris Dodd, one of Vice President Joe Biden’s best friends.

“As the new Chairman and CEO of the MPAA, Chris Dodd improperly leveraged his friendship with Joe Biden to achieve the MPAA’s objectives. Former Senator Dodd’s relationship with the Vice President– who comes off manipulated, a cheerfully credulous facilitator – together with the Obama Administration’s ravenous hunger for campaign contributions, has given the MPAA absolute control over how the U.S. Department of Justice plays the game in enforcing copyright law,” they write.

Continuing on the corruption theme, Rothken and Amsterdam go on to describe MPAA’s influence in Washington as “State Capture.”

“The MPAA’s overt use of campaign contributions to sway the U.S. government into engaging in what amounts to unlawful action against Megaupload reflects a form of State Capture, a term coined by the World Bank to describe a brand of corruption characterized by the ability of a relatively small number of private interests to shape the official rules of the game through direct payments or other forms of financial influence.”

One cited example of how political funding was used to influence decisions was a January 2012 threat from the MPAA’s Chris Dodd. He stated that Hollywood would stop donating to politicians who fail to protect their interests.

“By threatening to revoke vital political and monetary support from the Administration at a crucial moment, the MPAA has exercised de facto control over key levers of executive power in Washington – law enforcement, prosecutors, trade negotiators – and is using those instruments of state power to further the financial interests of its members in Hollywood.”

The white paper further gives numerous examples of how Megaupload’s lawyers believe the authorities abused their power to further the interests of the copyright lobby. The overall conclusion is that people’s rights and freedoms are trumped to secure political donations, which are clear signs of contract prosecution.

“The U.S. government’s attack against Megaupload bears all the hallmarks of a contract prosecution: a case resting on erroneous theories of criminal law, littered with due process violations and prosecutorial abuses, carried out for the benefit of a select few in exchange for their political and financial support,” the lawyers write.

“In the name of eliminating copyright infringement, Hollywood has exerted a corrupting influence in Washington, leading us all down a slippery slope that not only threatens innovation and Internet freedom, but also has profound implications for constitutional principles of free speech, privacy and due process.”

Finally, the white paper suggests that this is not an isolated incident. It warns the public that these corrupt forces can quash anything that stands in the way of the private interests of those who make significant campaign contributions.

“Megaupload and Kim Dotcom are today’s targets, but the crosshairs can just as easily be trained on anybody who dares challenge or inconvenience a special interest that holds sway in Washington, and the current Administration – with its notoriously insatiable appetite for campaign contributions – seems all too willing to cooperate.”

The above points are just samples from the white paper, which is certainly worth reading in its entirety. There is no doubt that the Megaupload legal team have just planted a virtual bomb under the Megaupload prosecution. It will be interesting to see how this is received, and whether we will hear a response from the accused.

Kim Dotcom to President Trump: You won because of Seth Rich and Wikileaks

Video montage shows what is really happening in China amid Coronavirus...