By Susan Duclos | All News PipeLine

On Friday night’s Survive To Thrive show, The Hawk reported on the recent notification given to pilots about the airspace in DC, Virginia, and Maryland.

Not only did NORAD announce “test flights” over the DC area, but, as an insider source tells ANP, part of that “practice” was moving the “elite” to their bunkers in preparation for a huge event which would mandate their bugging out fast. As our source tells us, “They know its coming.”

In July 2014, Geoengineering Watch, in an article titled “The Global Elite Are Preparing For Total Collapse,” highlighted a very interesting report by Intellihub, where a whistleblower from within the Denver International Airport (DIA) complex confirmed for the very first time the “existence of a massive deep underground military base (DUMB) located beneath the airport.”

Some speculate that a deep underground military facility, part of the Continuity of Government (COG) program exists on the site. A massive underground city to be used by our government in the event that Washington or our central governments command hub is compromised. According to some investigative reports, including one headed up by the former Governor of Minnesota, Jesse Ventura, the underground city that lies beneath the airport quite possibly connects to other deep underground military installations throughout the country. 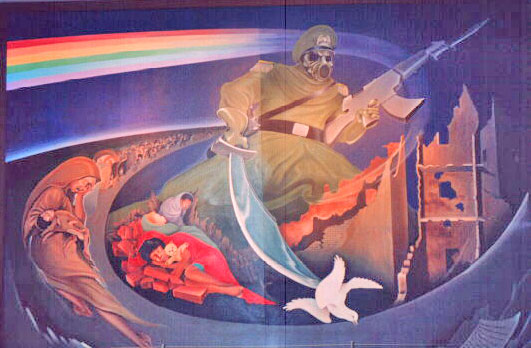 According to their source, some specific points were revealed, see them all here, but we are highlighting some of the most relevant to this article below:

There is a militarized intermediary entrance located in the “United Airlines” section of the underground. The actual door number was reveled by my source with great hesitation. The actual door code is “BE64B” unknown until now to the general public.

A nearly 3 mile long tunnel heads out from the intermediary entrance “BE64B“, to a full-blown Department of Defense (DOD) sanctioned militarized entrance nestled in a set of 5 buildings 120′ beneath the surface located Northeast of the Jeppesen Terminal.

This ties in with maps recently shown in connection to Jade Helm 15, the Walmart bizarre closing of at least five locations, some in Jade Helm states and the map of the underground tunnel/ DUMBS built throughout the US.

Colorado is a very important piece in this large puzzle because if these sources are correct and the DIA will be the new US Capitol after DC falls, then it would explain the foreign troops, specifically Russian troops, that have been reportedly training on in Colorado for years. (See – here and here)  Note – Chinese troops have also been reportedly trained on US soil for the first time in history as well. 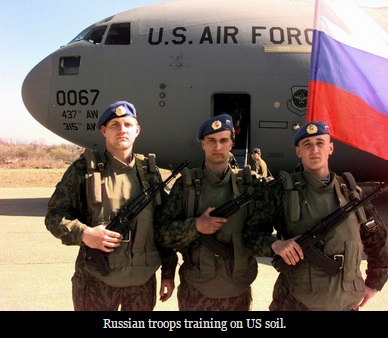 “Also the reason that Colorado has so many foreign troops is that it becomes the new Capitol of the US when DC gets wiped out -They want to wipe out the entire resister population in Colorado -The forest fires set in Colorado to burn out hiding areas- Notice Colorado said they weren’t going to participate in Jade Helm? Not True, they may not openly, but covertly the patriots will be systematically targeted and eliminated.”

In December 2014, ANP reported on  doomsday lairs being prepared for a “major catastrophe,” where we detail the massive amount of bunkers set up across America, via documentation provided by Bob Fletcher investigations, discussed by Mr. Fletcher and Steve Quayle on the Hagmann and Hagmann show published on December 5, 2014.

A few of the most talked about locations are Denver Airport, Weather Mountain, Site “R” Raven Rock, Area 51, Camp David and Under the Capitol Building…. just to name a few.

Preparations by the “elite”, high level military, politicians, and the super-rich have been reported on multiple times, including January 15, 2015, over at Zero Hedge who headlined with the ominous titled of “What Do They Know? Why Are So Many Of The Super Wealthy Preparing Bug Out Locations?.” The article highlights statements made about “hedge fund managers all over the world who are buying airstrips and farms in places like New Zealand because they think they need a getaway.”

By April 15, 2015, other reports were indicative of frenzied preparations being made in 2015 for some “event” to which could be anything from an EMP, a natural catastrophe, a war or total economic collapse, just to name some possibilities.

Via Michael Snyder over at InfoWars:

What in the world are the elite up to?  In recent days, we have learned that the New York Fed is moving a lot of operations to Chicago because of concerns about what a “natural disaster” could do, the federal government is buying 62 million rounds of ammunition commonly used in AR-15 semi-automatic rifles for “training” purposes, and NORAD is moving back into Cheyenne Mountain because it is “EMP-hardened”.  In addition, government authorities have scheduled a whole host of unusual “training exercises” all over the nation.  So are the elite doing all of this in order to prepare for something really BIG, or should we just chalk up all of this strange activity to rampant government paranoia?

There does seem to be some indications that the “event” will be a world war and the related economic turmoil that would accompany such actions, with May 3, 2015 report just emailed to ANP, at Shenandoah, with the headline “Cold War v2.0: NATO Establishes Direct Hotline to Russian Defense Ministry,” which states in the article “NATO and Russia are trying to downplay the growing animus between Russia and the West should it be known was getting closer to conflict levels would cause great turmoil in financial markets as witnessed when Russia seized Crimea. Thus the establishment of this hotline should worry residents of the Baltic States and Moldova as it would appear a new Russian spring offensive in the Ukraine might well be in the offing. Stay tuned as America’s leadership seems hell bent on using Poland as a battlefront to sacrifice their soldiers to further the banksters plans for world domination.”

It isn’t just the US elite that is preparing their bunkers and bug out locations, as recent news shows that Russia elites are also preparing for something huge, evidenced by information contained in another zero Hedge report titled “Why Is Russia Building Massive Underground Bomb Shelters?”

In early March 2015, Vladimir Putin was the intense topic across the world as he disappeared from the public eye for 10 days, coming just two days after an Internet death hoax about him made the rounds and to this day, no official explanation has been given by Russia on where he went and why he went missing. Some speculated over a coup against him, but others wondered if he too was “practicing” his own movement to the bunkers.

THEY KNOW IT IS COMING

Recent headlines show that militants, ISIS, hackers, even unauthorized drones have been noted and reported as threatening White House security, pretty much telegraphing that Washington DC is the “target,” and the latest reports of a “gyrocopter” which breached DC’s protected airspace and landed on the Capitol lawn caused headlines that lawmakers “lack confidence” in the military’s ability to protect Washington from attacks.

This brings us back to the NORAD drills over the Washington DC area, which includes Virginia and Maryland ….. and the other part of those drills, the part not discussed publicly but which insiders have knowledge of. The final “drills” and practice runs to remove the “elite” from the danger zones and hide them away in their underground bunkers.

Hawk’s Survive to Thrive show is divided into four parts, he discusses the “movement to the bunkers” in part 2, shown directly below. Beneath that is the December 2014 Hagmann show with Quayle and Fletcher, which is even more relevant now than it was then since it appears the “event” they have been preparing for is closer. The last video is a rundown by ANP on those bunkers, going over the locations from Fletcher’s site.

For all parts of the Hawk’s show from Friday, YouTube user cs rivers, has all four segments here.

William Cooper told the truth about why the U.S. government is afraid of UFO and alien disclosure before he was shot and killed