While this is totally fine, since the company is transparent about its policies, using Edward Snowden’s name for their PR is a bit ironic. After all, if the authorities wanted to they could easily obtain Snowden’s IP-address from HideMyAss.

After the Snowden revelations interest in privacy services including VPNs has skyrocketed. This hasn’t gone unnoticed to HideMyAss, one of the largest VPN providers, who are now using Snowden’s name to promote their product. Some may think that’s a clever move, but it is rather ironic since HideMyAss previously handed over personal details of a Lulzsec member to the U.S. Government.

Over the past couple of months the revelations of Edward Snowden’s leaks have dominated the news.

As a result, interest in anonymity services such as Tor and VPNs has increased as even regular Internet users don’t like the idea of being monitored.

The increased demand for privacy has given an enormous boost to many VPN providers, many of which claim they can protect users from the prying eyes of “monitoring” outfits, to a certain degree.

One VPN service takes its response one step further, as it explicitly uses Snowden’s name for PR purposes. As can be seen below, the popular VPN HideMyAss lists a screenshot of an account with the username ESnowden in the App Store.

This ESnowden is apparently trying to connect to a United States IP-address from Russia, a reference to the current location of the NSA leaker. 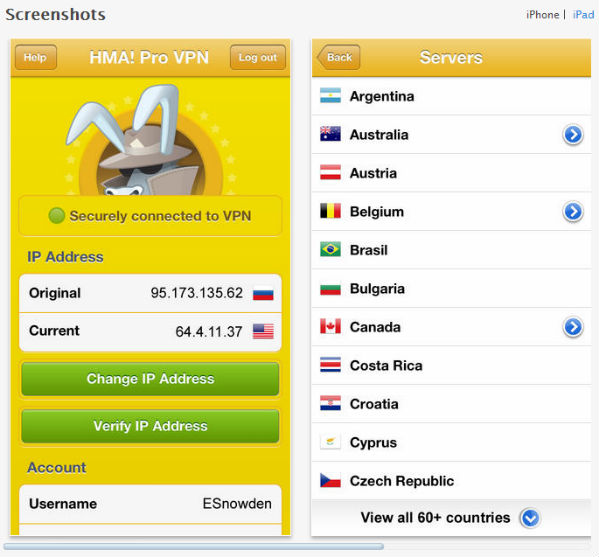 While this type of PR isn’t particularly tasteful, it’s also rather ironic since HideMyAss’ service does very little to keep users anonymous.

Two years ago HideMyAss made headlines all over the Internet when it became known that they were ordered to share the personal details of one of its users with the authorities. The user in question, the now-jailed LulzSec hacker Cody Kretsinger, was exposed by the VPN which he assumed would keep him safe.

This revelation got a discussion going about the logging policies of various providers, and it was the reason for us to provide an overview of VPN services that store no, or minimal logs.

HideMyAss certainly didn’t make it into this list. The company records the following identifiable information of its users according to its logging policy, which is then stored for a period of two to three months:

In other words, in terms of IP-logging HideMyAss doesn’t really offer more privacy than the average Internet provider.

While this is totally fine, since the company is transparent about its policies, using Edward Snowden’s name for their PR is a bit ironic. After all, if the authorities wanted to they could easily obtain Snowden’s IP-address from HideMyAss.

Perhaps this type of PR should serve as a reminder that not all VPNs are as anonymous as they appear to be.

Have you been covertly stalked or watchlisted and don’t know it?

Battered senator to press: “I took a fall, knocked me unconscious”