Many believe that Biblical signs of famine and pestilence have begun to appear in our world, and that’s why the title of this article quotes Ezekiel 5:12

In what is now admitted by all the top infectious disease experts to be a “post-antibiotics era” where Big Pharma’s drugs are useless, we are now facing unprecedented outbreaks of Ebola, Chikungunya and even the Plague.

Diseases are spreading out of control in many regions while at the same time the Centers for Disease Control (CDC) is recklessly exposing its own scientists to Anthrax and other deadly agents. (1)

Here’s a frightening update on some of the most dangerous infectious diseases that are now spreading out of control:

Ebola outbreak out of control; 600 dead and counting

From The Extinction Protocol blog (2):

Ebola has spread through several West African countries, including Sierra Leone, Liberia and Guinea, since its latest outbreak in February. The death toll from the virus has surpassed 600 despite efforts by regional and international health experts to contain the epidemic. There is currently no known cure for Ebola, a form of hemorrhagic fever whose symptoms are diarrhea, vomiting and bleeding.

A rare airborne form of the plague that can spread through coughing and sneezing has infected a Colorado man, and state health officials are searching for other possible cases.

Following that story, Bloomberg went on to report that the airborne disease had already begun to spread to other victims: (4)

Three more plague cases were found in Colorado, a week after the first infection of the deadliest form of the disease was reported in the state in a decade. The man initially reported with pneumonic plague on July 11 is hospitalized. Two of the new cases also had pneumonic plague, while the third had a milder form.

There is no vaccine and no treatment. The Centers for Disease Control has listed a total of 497 cases in the U.S. in 35 states, Puerto Rico and the Virgin Islands, 197 locally transmitted. “The arrival of chikungunya virus, first in the tropical Americas and now in the United States, underscores the risks posed by this and other exotic pathogens,” Roger Nasci, a mosquito expert at the Centers for Disease Control and Prevention, said in a statement.

Drug-resistant superbug infections have reached near-epidemic levels across U.S. hospitals, with an alarming 500% increase now documented in a study just published in the August issue of Infection Control and Hospital Epidemiology (the journal of the Society for Healthcare Epidemiology of America).

Lead author of the study, Dr. Joshua Thaden, warned “This dangerous bacteria is finding its way into healthcare facilities nationwide… A CRE epidemic is fast approaching… Even this marked increase likely underestimates the true scope of the problem given variations in hospital surveillance practices.”

Middle East Respiratory Syndrome (MERS) may be airborne… “These data show evidence for the presence of the airborne MERS in the same barn that was owned by the patient and sheltered the infected camels,” the study authors said in a statement.

As yet more evidence that medical staff are some of the first people who tend to become infected with deadly diseases, a top Ebola doctor has himself contracted Ebola.

The head doctor fighting the deadly tropical virus Ebola in Sierra Leone has himself caught the disease, the government said.

The 39-year-old Sheik Umar Khan, hailed as a “national hero” by the health ministry, was leading the fight to control an outbreak that has killed 206 people in the West African country. Ebola kills up to 90 percent of those infected and there is no cure or vaccine.

To the shock of international observers, an entire city in China has been quarantined by the government following an outbreak of the plague.

A city in China has reportedly been sealed off after one resident died from bubonic plague… Plague is an infectious disease caused by the bacteria Yersinia pestis that is carried by rodents, and can be transmitted to people through flea bites or by direct contact with the tissues or fluids of an animal with plague, according to the Centers for Disease Control and Prevention. The disease is known for killing millions of people in Europe in the 1300s, in a pandemic called the Black Death.

As reported in TheWeek.com: (9)

This year’s mayfly hatch in the Mississippi River reached Biblical proportions. Wisconsin residents captured some stunning — read: horrifying — images of the mayfly emergence, which happened on Sunday night. Check out the swarm below. 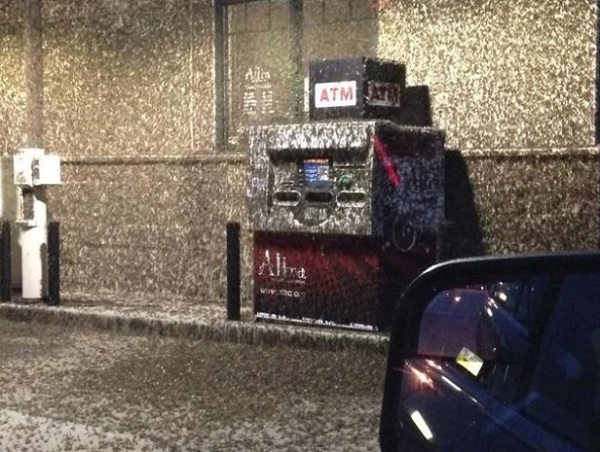 One third to die by the sword

Beyond the plague and pestilence now emerging, we are also witnessing what may be the start of World War IIi with recent events in Ukraine.

The U.S. and Russia are in a tense standoff over trying to assign blame for the downing of MH17, a passenger jet with hundreds of innocent civilians on board. The U.S. government says Russia did it, but when the State Department was pressed on what evidence they might have to prove it, they could only point to tweets and Youtube videos as their “intelligence sources.” Wow.

As explained on LewRockwell.com: (10)

Tuesday the US government admitted it had been bluffing about its certainty that Russia was behind the downing of Malaysian Air Flight MH-17 over Ukraine. This dramatic turn of events started with State Department Spokeswoman Marie Harf claiming Monday that the State Department’s certainty of Russian involvement in the apparent downing of the plane was primarily based on “social media” evidence.

Many observers believe these events may be the spark that leads to war. Already, 1 in 10 Americans now believes America should launch an all-out war on Russia due to current events.

…one in 10 say the United States should take military action if there is clear evidence that Russia is responsible for the shooting down of the plane, which killed all 298 passengers and crew.

Infowars‘ Steve Watson added this all-important analysis comment: “The number may at first seem low, but it translates to one in every ten Americans believing that a war with a nuclear super power is a good idea.” (12)

One third scattered to every wind

Wrapping up the Biblical quote, “one-third scattered to the wind” could very easily describe the aftermath of a grid-down scenario in which masses of homeless refugees flee U.S. cities in an effort to survive.

We already know that the vast majority of Americans now depend almost entirely on the government for their survival: housing, health insurance, food stamps, unemployment checks, disability benefits, retirement checks, social security checks, Medicare coverage, housing subsidies and more. Yet, at the same time, the U.S. government is beyond bankrupt. It’s trillions of dollars in debt and the enormity of that debt is multiplying at an alarming rate.

It doesn’t take a mathematical genius to figure out that the U.S. government’s financial default is only a matter of time, and when it happens, all the business sectors kept afloat by government payments and entitlements will crumble: Big Pharma and the health care system, Big Food manufacturers, large agricultural producers, weapons manufacturers, universities, public services (including law enforcement) and more.

When that happens, the cities will rapidly become uninhabitable due to crime waves that spread faster than Ebola. No honest citizen will be safe in an urban area, and residents will attempt to flee into lower-density population areas, scattering them all “to every wind.”

Humanity is one event away from a global wipeout

What can you do against all this? Keep your head on straight and prepare for uncertain times. A wave of disease and pestilence has already begun, and the “health authorities” openly admit all their vaccines, antibiotics and pharmaceutical drugs are worthless against these new pandemics. Humanity right now stands just one event away from a global wipeout from infectious disease.

All it takes is a simple laboratory mistake, the release of an intentional bioweapon, or a random mutation of a virus that becomes a global killer. Humanity is largely defenseless against pandemics and infectious disease, yet we keep packing people into high-density urban areas as if we were all magically immune.

We aren’t. And the pandemic wave may have only just begun.

U.S. to screen airline passengers from China for new illness

WikiHow goes insane with vaccine propaganda, teaches children how to “get...

Alex Jones: “I am under criminal espionage investigation by the FBI”

William Cooper told the truth about why the U.S. government is...