Shares of GEO and CXW are crashing to multi-year lows after The Washington Post reports that The Justice Department says it will end the use of private prisons.

As we noted previously,

States now have quotas to meet for how many Americans go to jail. Increasing numbers of states have contracted to keep their prisons at 90% to 100% capacity. This profit-driven form of mass punishment has, in turn, given rise to a $70 billion private prison industry that relies on the complicity of state governments to keep the money flowing and their privately run prisons full, “regardless of whether crime was rising or falling.”

As Mother Jones reports, “private prison companies have supported and helped write … laws that drive up prison populations. Their livelihoods depend on towns, cities, and states sending more people to prison and keeping them there.” Private prisons are also doling out harsher punishments for infractions by inmates in order to keep them locked up longer in order to “boost profits” at taxpayer expense. All the while, the prisoners are being forced to provide cheap labor for private corporations. No wonder the United States has the largest prison population in the world at a time when violent crime is at an all-time low.

As a reminder, we have more people in prison than any other nation on the planet.  We also have a higher percentage of our population locked up than anyone else does by a very large margin.  But has all of this imprisonment actually made us safer?  Well, the last time I checked, crime was still wildly out of control in America and for the most recent year that we have numbers for violent crime was up 15 percent.  The number of people that we have locked up hasquadrupled since 1980, but this is not solving any of our problems.  Clearly, what we are doing is not working. 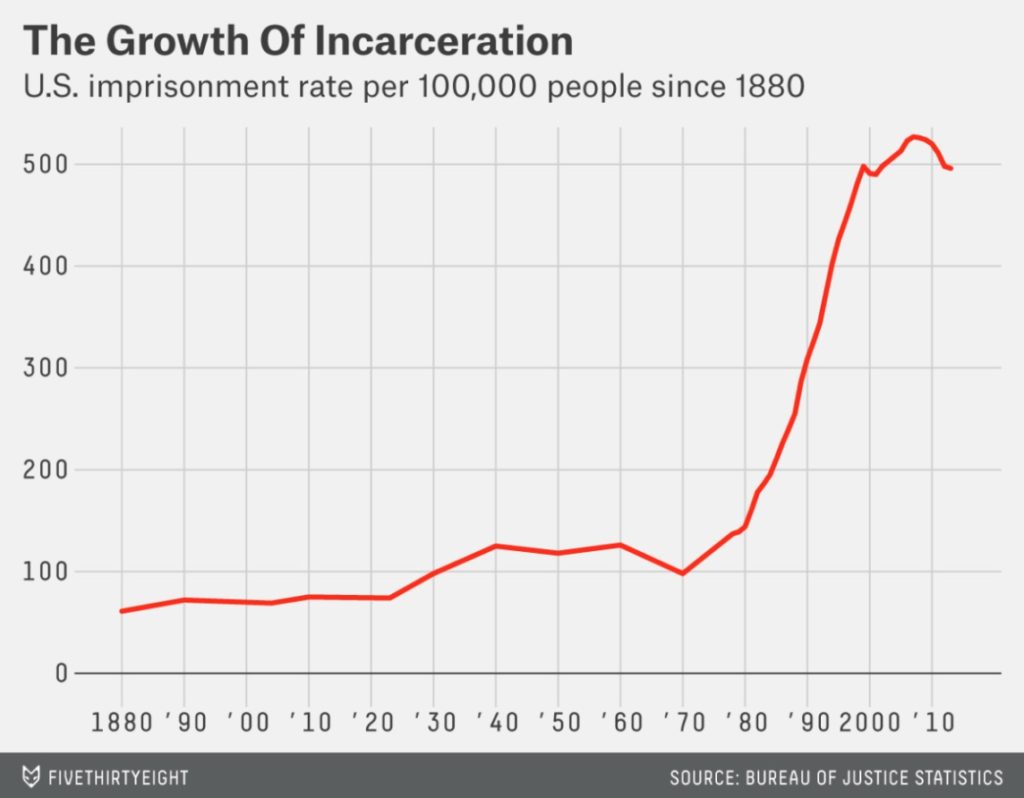 Land of the free indeed…

And now, as WaPo details, it appears this cronyism is coming to an end…

The Justice Department plans to end its use of private prisons after officials concluded the facilities are both less safe and less effective at providing correctional services than those run by the government.

Deputy Attorney General Sally Yates announced the decision on Thursday in a memo that instructs officials to either decline to renew the contracts for private prison operators when they expire or “substantially reduce” the contracts’ scope. The goal, Yates wrote, is “reducing — and ultimately ending — our use of privately operated prisons.”

“They simply do not provide the same level of correctional services, programs, and resources; they do not save substantially on costs; and as noted in a recent report by the Department’s Office of Inspector General, they do not maintain the same level of safety and security,” Yates wrote.

According to the Inspector General’s report, private prisons housed roughly 22,660 federal inmates as of December 2015. That represents about 12 percent of the Bureau of Prisons total inmate population, according to the report.

In her memo, Yates wrote that the Bureau of Prisons began contracting with privately run institutions about a decade ago in the wake of exploding prison populations, and by 2013, as the federal prison population reached its peak, nearly 30,000 inmates were housed in privately operated facilities. But in 2013, Yates wrote, the prison population began to decline because of efforts to adjust sentencing guidelines, sometimes retroactively, and to change the way low-level drug offenders are charged. She said the drop in federal inmates gave officials the opportunity to re-evaluate the use of private prisons.

Yates wrote that private prisons “served an important role during a difficult time period,” but they had proven less effective than facilities run by the government. The contract prisons are operated by three private corporations, according to the Inspector General’s report: Corrections Corporation of America, GEO Group and Management and Training Corporation. The bureau of prisons spent $639 million on private prisons in fiscal year 2014, according to the report.

Yates said it was “really hard to determine whether private prisons are less expensive” and whether their closure would cause costs to go up, though she said officials did not anticipate having to hire additional Bureau of Prisons staff.

“Bottom line, I’d also say, you get what you pay for,” Yates said.

One quick question – what will happen to all those prisoners? Ironic on the day that Turkey’s Erdogan decides to release 38,000 prisoners from his nation’s jails to make room for the coup assailants.

We suspect Senator Tom Cotton will not be pleased… as the only thing on Cotton’s mind is filling up jail cells, because now the Senator wants to enlarge US prisons so they can be filled up further. At a speech at the Hudson Institute, Cotton said that if anything, the US has an under-incarceration problem.

“There’s a bill in congress now that would sharply reduce mandatory minimums for a slew of federal crimes. The bill’s advocates contend that we’re locking up too many offenders, for too long, for too little, and we can’t afford it anyway, and we should show more empathy toward those caught up in the criminal justice system. These arguments put simply are baseless. Take a look at the facts. First, the claim that too many criminals are being jailed, that there is over-incarceration, ignores an unfortunate fact. For the vast majority of crimes, the perpetrator is never identified, or arrested, let alone prosecuted, convicted, and jailed. Law enforcement is able to arrest or identify a likely perpetrator for only 19 percent of property crimes and 47 percent of violent crimes. If anything, we have an under-incarceration problem.“

Corporations have privatized most of the prison functions once handled by governments. They run prison commissaries and, since the prisoners have nowhere else to shop, often jack up prices by as much as 100 percent. Corporations have taken over the phone systems and charge exorbitant fees to prisoners and their families. They grossly overcharge for money transfers from families to prisoners. And these corporations, some of the nation’s largest, pay little more than a dollar a day to prison laborers who work in for-profit prison industries. Food and merchandise vendors, construction companies, laundry services, uniforms companies, prison equipment vendors, cafeteria services, manufacturers of pepper spray, body armor and the array of medieval instruments used for the physical control of prisoners, and a host of other contractors feed like jackals off prisons. Prisons, in America, are a hugely profitable business.

Our prison-industrial complex, which holds 2.3 million prisoners, or 25 percent of the world’s prison population, makes money by keeping prisons full. It demands bodies, regardless of color, gender or ethnicity. As the system drains the pool of black bodies, it has begun to incarcerate others. Women—the fastest-growing segment of the prison population—are swelling prisons, as are poor whites in general, Hispanics and immigrants. Prisons are no longer a black-white issue. Prisons are a grotesque manifestation of corporate capitalism. Slavery is legal in prisons under the 13th Amendment of the U.S. Constitution. It reads: “Neither slavery nor involuntary servitude, except as punishment for crime whereof the party shall have been duly convicted, shall exist within the United States. …” And the massive U.S. prison industry functions like the forced labor camps that have existed in all totalitarian states.

Corporate investors, who have poured billions into the business of mass incarceration, expect long-term returns. And they will get them. It is their lobbyists who write the draconian laws that demand absurdly long sentences, deny paroles, determine immigrant detention laws and impose minimum-sentence and three-strikes-out laws (mandating life sentences after three felony convictions). The politicians and the courts, subservient to corporate power, can be counted on to protect corporate interests.

Corrections Corporation of America (CCA), the largest owner of for-profit prisons and immigration detention facilities in the country, had revenues of $1.7 billion in 2013 and profits of $300 million. CCA holds an average of 81,384 inmates in its facilities on any one day. Aramark Holdings Corp., a Philadelphia-based company that contracts through Aramark Correctional Services to provide food to 600 correctional institutions across the United States, was acquired in 2007 for $8.3 billion by investors that included Goldman Sachs.

The three top for-profit prison corporations spent an estimated $45 million over a recent 10-year period for lobbying that is keeping the prison business flush. The resource center In the Public Interest documented in its report “Criminal: How Lockup Quotas and ‘Low-Crime Taxes’ Guarantee Profits for Private Prison Corporations” that private prison companies often sign state contracts that guarantee prison occupancy rates of 90 percent. If states fail to meet the quota they have to pay the corporations for the empty beds.
CCA in 2011 gave $710,300 in political contributions to candidates for federal or state office, political parties and so-called 527 groups (PACs and super PACs), the American Civil Liberties Union reported. The corporation also spent $1.07 million lobbying federal officials plus undisclosed sums to lobby state officials, according to the ACLU.

The United States, from 1970 to 2005, increased its prison population by about 700 percent, according to statistics gathered by the ACLU. The federal Bureau of Justice Statistics, the ACLU report notes, says for-profit companies presently control about 18 percent of federal prisoners and 6.7 percent of all state prisoners. Private prisons account for nearly all newly built prisons. And nearly half of all immigrants detained by the federal government are shipped to for-profit prisons, according to Detention Watch Network.

States, with shrinking budgets, share in the corporate exploitation. They get kickbacks of as much as 40 percent from corporations that prey on prisoners. This kickback money is often supposed to go into “inmate welfare funds,” but prisoners say they rarely see any purchases made by the funds to improve life inside prison.

Portland Police find themselves in ground war against BLM protesters