With his very own disloyal-self perfectly exemplifying the word ‘hypocrite’, retired US Army General Wesley Clark has confirmed the existence of FEMA-style concentration camps to hold Americans for life sentences without a trial via the new tweet seen below in which he purposely says: “Never said ‘muslim’, ‘internment’ or called for NEW camps”.

In doing so, Clark has let us know that, beyond a doubt, there are ALREADY ‘camps’ here in America to hold ‘disloyal’ Americans and that there is no need for NEW camps. 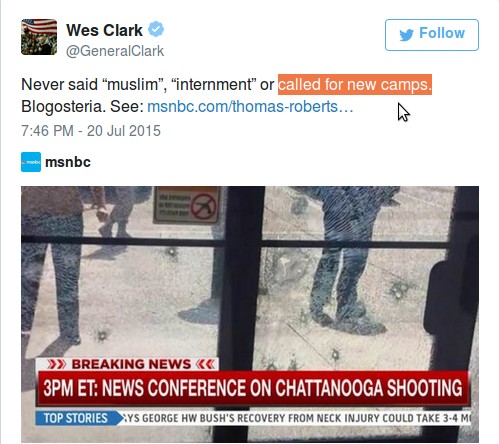 Days ago, Clark made huge news after saying that concentration camps should be used to house disloyal Americans causing ANP to ask, who gets to determine if Americans are ‘disloyal’, criminals who have desecrated the US Constitution masquerading as politicians in Washington DC?

As YouTube videographer Dave Acton points out in the 1st video below, US Army General Wesley Clark should likely be one of the 1st people thrown into these camps for his own disloyalty.

Acton suggests that disloyal Clark, after recently divorcing his wife of 46 years to ‘shack up’ with a woman from China who considers herself to be Chinese rather than American despite being here since she was 8 years old, has ties to the Communist Chinese government so should be treated as someone who is ‘sleeping with the enemy‘ as the US and China are nearly now at war and certainly in a ‘cyber war’.

In fact, Clark’s history with China is rife with fraud. While ANP will say that proof of Clark’s ties to Communist China due to his new relationship are dubious, we have to ask, do we really want to have someone who has this understanding of the word ‘disloyal’ having the power to intern ‘disloyal’ Americans?

Clark’s ‘partner’ Shauna Mei became an overnight sensation in China after it became apparant that she was the person resonsible for ending Clark’s 46-year marriage. The marriage breakup came as a complete shock to Clark’s ex-wife who moved with him 32 times during his military career.

In the 2nd video below, Alex Jones and Infowars take another look at the comments by Wesley Clark that ‘disloyal’ Americans should be rounded up and thrown away in camps.

Jones makes it clear that those who threaten to harm others, those threatening to harm innocent Americans, should be locked away. Yet should America return to the days of World War 2 where nearly ALL Americans of Japanese descent where locked away despite having lived here for decades?

Intellihub Note: The following infographic highlights the startling similarities between previous concentration camps and new malls going up all across America.

Seniors citizens, others in Azerbaijan treated like cattle headed for slaughter, beaten, taken to camps