Are we on the verge of an unprecedented global currency crisis? On Tuesday, the euro briefly fell below $1.07 for the first time in almost a dozen years.  And the U.S. dollar continues to surge against almost every other major global currency.  The U.S. dollar index has now risen an astounding 23 percent in just the last eight months.  That is the fastest pace that the U.S. dollar has risen since 1981.  You might be tempted to think that a stronger U.S. dollar is good news, but it isn’t.  A strong U.S. dollar hurts U.S. exports, thus harming our economy.  In addition, a weak U.S. dollar has fueled tremendous expansion in emerging markets around the planet over the past decade or so.  When the dollar becomes a lot stronger, it becomes much more difficult for those countries to borrow more money and repay old debts.  In other words, the emerging market “boom” is about to become a bust.  Not only that, it is important to keep in mind that global financial institutions bet a tremendous amount of money on currency movements.  According to the Bank for International Settlements, 74 trillion dollars in derivatives are tied to the value of the U.S. dollar, the value of the euro and the value of other global currencies.  When currency rates start flying around all over the place, you can rest assured that someone out there is losing an enormous amount of money.  If this derivatives bubble ends up imploding, there won’t be enough money in the entire world to bail everyone out.

Do you remember what happened the last time the U.S. dollar went on a great run like this?

As you can see from the chart below, it was in mid-2008, and what followed was the worst financial crisis since the Great Depression… 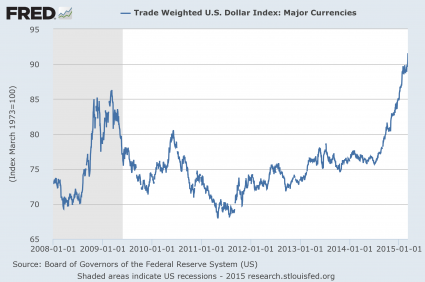 A rapidly rising U.S. dollar is extremely deflationary for the overall global economy.

This is a huge red flag, and yet hardly anyone is talking about it.

Meanwhile, the euro continues to spiral into oblivion… 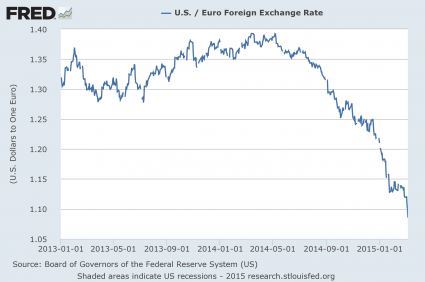 How many times have I said it?  The euro is heading to all-time lows.  It is going to go to parity with the U.S. dollar, and then it is eventually going to go below parity.

This is going to cause massive headaches in the financial world.

The Europeans are attempting to cure their economic problems by creating tremendous amounts of new money.  It is the European version of quantitative easing, but it is having some very nasty side effects.

The markets are starting to realize that if the value of the U.S. dollar continues to surge, it is ultimately going to be very bad for stocks.  In fact, the strength of the U.S. dollar is being cited as the primary reason for the Dow’s 332 point decline on Tuesday…

Editor-in-chief of Intellihub: “They are incrementally controlling the populace through a...

Where did all the bodies go? Highrise has only 7 tenant...