What would you say if I told you that Americans are nearly 60 TRILLION dollars in debt?

Well, it is true.  When you total up all forms of debt including government debt, business debt, mortgage debt and consumer debt, we are 59.4 trillion dollars in debt.  That is an amount of money so large that it is difficult to describe it with words.  For example, if you were alive when Jesus Christ was born and you had spent 80 million dollars every single day since then, you still would not have spent 59.4 trillion dollars by now.  And most of this debt has been accumulated in recent decades.  If you go back 40 years ago, total debt in America was sitting at about 2.2 trillion dollars.  Somehow over the past four decades we have allowed the total amount of debt in the United States to get approximately 27 times larger.  This is utter insanity, and anyone that thinks this is sustainable is completely deluded.  We are living in the greatest debt bubble of all time, and there is no way that this is going to end well.  Just check out the chart… 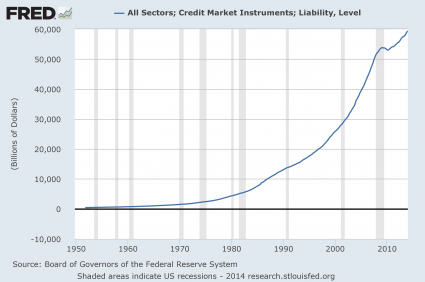 When the last recession hit, total debt in America actually started going down for a short period of time.

But then the Federal Reserve and our politicians in Washington worked feverishly to reinflate the bubble and they assured everyone that everything was going to be just fine.  So Americans once again resorted to their free spending ways, and now total debt in the United States is rising at almost the same trajectory as before and has hit a new all-time record high.

In America? Rapper charged with terrorism over controversial lyrics critical of police