The federal agency responsible for certifying foods as organic is on a paramilitary extremist splurge, bidding on automatic submachine guns (see yesterday’s article for proof) with night sights and 30-round magazines.

Click here to see the USDA purchase bid for yourself.

This ballistic body armor, when combined with the submachine guns the USDA was already shown to be purchasing, would outfit USDA agents as true paramilitary soldiers on “battlefield USA.”

Check out this screen shot of the USDA’s bid for ballistic body armor (article continues below): 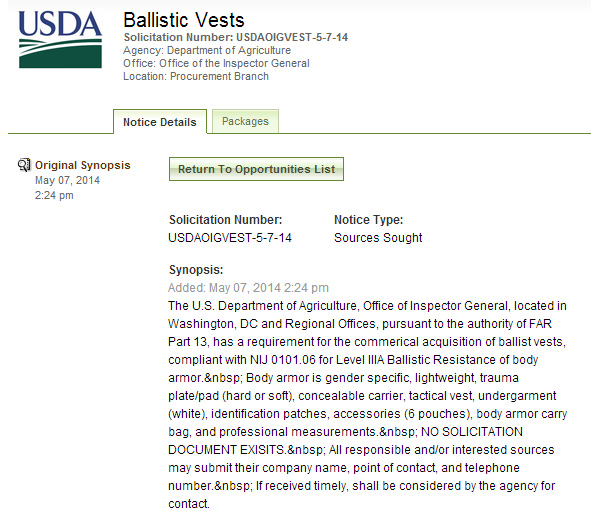 The extremist militarization of U.S. federal agencies is happening quietly but aggressively right under the noses of the American people. Just a few generations ago, even the FBI wasn’t allowed to carry firearms, but today every agency under the sun seems to think it needs its own private army: EPA, IRS, BLM, DEA, ATF and now even the USDA.

What’s especially concerning about this is that none of these agencies fight foreign wars for America. They engage in domestic action against Americans, not foreign enemies. Thus, this build-up of automatic weapons, ballistic body armor and the military “tanks” being increasingly purchased by police departments is an alarming indication that the U.S. government increasingly anticipates engaging in actions of war aimed at the American people.

It is extremely difficult to imagine any legitimate reason why the U.S. Department of Agriculture needs an army of soldiers outfitted with precisely the kind of weapons German Nazi shock troops used in World War II to clear homes of “resistance fighters.” That’s what submachine guns are for, after all: close-quarters, room-by-room fighting in apartment buildings, office complexes and urban areas. Will the USDA next put out solicitations for grenades and land mines, too?

Who’s to stop the USDA from building out its own private military, by the way? That’s the alarming state of the nation today, where any federal group can simply form its own paramilitary force without any congressional oversight whatsoever. We are fast entering the era of a government that operates by brute force rather than adhering to the will of the People. We are irrefutably descending into fascism and tyranny as each federal agency arms up with Armored Personnel Carriers, automatic weapons, ballistic body armor and literally billions of rounds of stockpiled ammunition.

I find it fascinating that citizens who purchase firearms and bullets are often derided as being “anti-government.” What do we call it, then, when the government stockpiles firearms, body armor and bullets? Anti-citizen? Or are we to seriously believe, as some on the radical left seem to argue, that “only government can be trusted with all the guns?”

Historically, nearly every genocide in human history was carried out by armed governments murdering disarmed civilian populations. In fact, this “democide” is the single largest cause of death in the history of human civilization, resulting in the deaths of at least 262 million people. (SOURCE)

This is how the infrastructure for a police state gets built: quietly and covertly while the masses snooze

That all this is taking place at a time when the federal government is increasingly calling for the mass disarmament of private citizens should unleash alarm bells for anyone who has studied history. WAKE UP, AMERICA, and see what’s happening: You are witnessing the deliberate construction of a police state infrastructure which only has one use: to be deployed as force against the American people.

That this same USDA is also operating in collusion with Monsanto and the corrupt, criminally run biotech industry is doubly alarming. Are we soon going to see a day when farmers who refuse to buy and plant genetically engineered seeds are visited by a paramilitary gang of heavily armed USDA agents who threaten them at gunpoint? It’s not mere hyperbole: people like myself who are vocal skeptics of GMOs are routinely hit with death threats and character assassination attempts organized by industry-funded operatives. The next step in our increasingly lawless society is to put guns in their hands and just order the USDA to shoot anyone who isn’t pro-GMO.

Again, this isn’t an exaggerated description in terms of human history. Many governments deliberately murdered large masses of intellectuals who disagreed with the government. Look up China’s Cultural Revolution if you don’t believe me… in many cases, anyone wearing glasses was shot on sight under the assumption that they were “academics” and therefore a threat to government power. As this science paper on Academia.edu reveals about the Cultural Revolution and the murder and torture of scientists:

Chairman Mao (1893–1976) and the “Gang of Four” shut down universities, dismantled scientific institutes, and punished intellectuals for elitist, bourgeois inclinations. Millions of scientists and students suffered banishment to the countryside to spend wasted years being re-educated by peasants. [And] …added to the list of eight evil kinds of people a “stinking ninth category” of intellectuals and scientists. An incredulous Needham cites various atrocities, including torture of scientists.

That’s where this is all headed, if you know anything about history, except that the murder and torture will be targeted toward those scientists who don’t kow-tow to fascist corporate “science.” The centralization of power by government and corporations has NEVER been halted by the choice of those in power. Every institution of power and authority incessantly seeks to expand its importance, its reach and its funding by any means necessary, including, ultimately, mass murder of civilians.

And now, the USDA wants to be in the guns and shooting business. After all, the only reason to buy such automatic weapons is to use them to either shoot somebody or threaten to do so. We are now entering the era of agricultural policy enforced at gunpoint.

This is so far beyond the limits of government set out by the Constitution that it screams for Congressional action to reel in these runaway paramilitary ambitions. Health freedom attorney Jonathan Emord warned about all this in his book, The Rise of Tyranny.

That book warns of how federal agencies have been given carte blanche power to do almost anything they wish — lawful or otherwise — with zero oversight by Congress or the voters. History has proven that all organizations will automatically seek power by any means necessary, and the end result, if not stopped by Congress, can only result in the paramilitary radicalization of federal agencies that sooner or later turn their guns on innocent Americans.

Sources for this article include:
http://www.fbo.gov/?s=opportunity&mode=form&…

This article was originally posted on Natural News.

The sun has entered a ‘lockdown’ period, which could cause freezing weather, famine

Seeds, gardens, meat packing being banned, shut down; everything you need to survive is being taken away