The UK’s sweeping internet censorship plans are ramping up, with the country’s main internet service providers (ISPs), who service 95% of UK households, rolling out ‘default’ web filters to meet the government’s call for an internet clampdown.

State-sanctioned internet filtering on this scale, often condemned when carried out by authoritarian regimes, is unparalleled in “free” western countries and sets a dangerous precedent. The way this policy has been introduced, sold and now implemented has been misleading and deceptive all along. Last year, Prime Minister David Cameron led the public to believe this is all about blocking pornography to stop the “corruption of childhood”, but it’s apparent the well-worn “think of the children” argument was just Trojan horse propaganda to create a moral pretext for introducing extensive censorship infrastructure.

While proponents point out people can still ask their ISPs to turn the filters off, the problem is the filters block more than people are led to believe and operate without transparency. They already target much more than pornography, and their reach will likely creep as time goes on. This is already happening. And who ultimately decides what these unaccountable, shadowy corporate web filters block is shrouded in mystery.

There was a long, well-orchestrated campaign to put these filters in place. A moral panic about online pornography was carefully manufactured to pave the way years before this occurred. I hope to unravel how this happened, and who is involved. A look at the players and history leading up to the policy announcement reveals the influence of various elite powerbrokers in government, media, international business, and religious lobby groups. Ultimately, the trail appears to point back to the ultra-secretive Bilderberg Group – a shadowy annual gathering of corporate, financial, international and government elites who meet on the sly away from the public eye, and discuss – and some would say set – global policy in complete secrecy.

I am concerned that behind these machinations is a hidden agenda that could see swathes of alternative websites blacked-out in a so-called free country, and that alternative spirituality is bound to be targeted. I am also concerned that the UK may just be the beginning. At this juncture it is important to reflect on how this policy arose, and where it is headed, to understand the serious ramifications for Britain and potentially the world. This article is a detailed investigation, so I’ve broken it up into 5 pages. I wanted to put all this information together in one post, and it turns out I dug up a lot more than I initially expected.

So to get a full picture of what is going on here, let’s take a look at how this censorship system works, then we’ll examine the elite powerbrokers pushing these plans, and the far-reaching implications of their agenda.

The Problem: Anti-Porn Catch-cry Just a Cover for a Sweeping Censorship Coup

In July last year, UK Prime Minister David Cameron called for internet censorship in the UK under the guise of protecting children from accessing legal pornography (illegal child abuse material was already blocked). This happened after a moral panic about pornography had been running for some time, which I’ll explain further on.

Now operational, the filters do indeed block a murky medley of content categories. Swathes of non-pornographic websites have already been caught in the dragnet, including charities and women’s rights websites. Those who warned over-blocking would happen – either by design or by accident – have been proven right. And since the filters have been announced, the government has suggested it will now seek to block “extremist websites” and “unsavoury content” without providing any clear explanation of how these terms will be applied. The Government’s use of vague and slippery catch-all terms have many concerned the filters will inevitably be used to suppress dissent.

Unlike in countries like China, the UK has outsourced web censorship to the private sector, with the UK’s four main ISPs, Talk Talk, BT, Sky and Virgin all filtering their own networks.

The UK Government pressured and coerced the ISPs to install the filters and now, publicly at least, it is standing back and letting the corporations iron out the details. Could this be a shrewd attempt to introduce an unprecedented level of censorship at arm’s length while avoiding liability or accountability for its implementation and overreach?

Lack of Transparency and oversight

There is a major lack of transparency in this setup. Astonishingly, there seems to be no legal oversight or clear regulatory framework for this massive outsourced censorship system. There is no clear and unified definition of blocked content categories or explanations as to why they warrant blocking, and no easy way to find out which sites are blocked or why. There is also no clear way to discover if your website is blocked by one or more of the ISPs (especially if you’re outside the UK), nor is there a single avenue of appeal if you’re even able to find out, because each ISP operates its own inscrutable filter. This leaves the public in the dark as to what is really happening – and perhaps that’s just how the government wants it.

The opaque system is probably deliberate. Not only does it allow the Government to wash its hands and avoid being held accountable for the implementation of the creeping censorship it introduced, but it makes it possible for hidden players to influence things behind the scenes unseen, and for a range of content to be blocked without people even realising it. A system so unaccountable is ripe for misuse, abuse and overreach.

The government has faced some hiccups however. Over-blocking concerns were highlighted after charity websites were blocked. In response the Government announced that it was covertly setting up a white list to protect the sites deemed off-limits from the filters. But just think of the implications of this. A backroom gathering of officials has now taken upon itself, behind closed doors, to unilaterally pick out the sites out of the millions on the World Wide Web that they think should not be censored by their filtering system, which they also instated through backroom meetings. Does this mean that any sites that don’t make it on the white list are fair game? And if the government has taken upon itself to set up a white list, has it also setup a blacklist? If so, how do you find out if you are on it?

‘Active Choice’ or Censorship by Stealth? 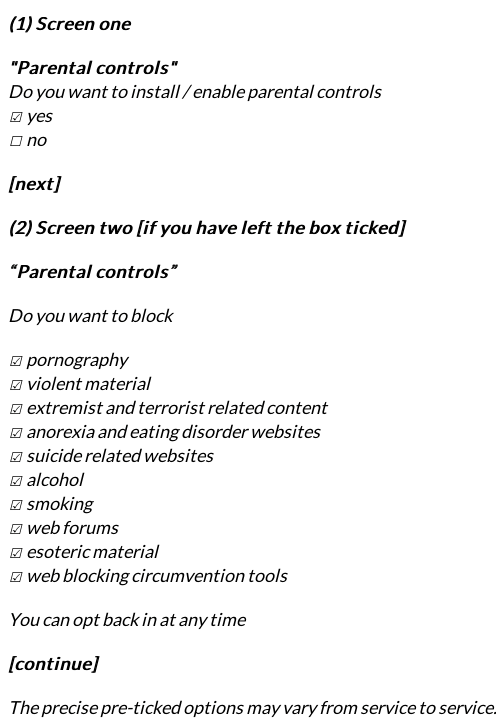 General examples of blocked content categories revealed by Open Rights Group, which is running a campaign against UK filtering

Advocates are quick to point out people still have a choice and the filtering is not mandatory. The ISPs are pre-ticking their blocked content categories in the sign-up process for new customers. This means people can manually un-tick and “opt out” of any categories they don’t want blocked.

But given that people tend to trust default settings given by their providers, could it be people are being nudged into selecting censorship by stealth? And if people don’t know how the filters really work and what they actually block, can they really make an informed choice?

Proponents of the censorship also often completely ignore the rights of content creators in this system. People whose websites are arbitrarily blocked in the UK will have a hard time discovering it. What “active choice” do they have? How can private companies be given so much unaccountable power over what content is appropriate or not for the UK population?