In all three instances, investors became highly leveraged in order to “take advantage” of a soaring stock market.  But of course we all know what happened each time.  The spike in margin debt was rapidly followed by a horrifying stock market crash.  Well guess what?  It is happening again.  In April (the last month we have a number for), margin debt rose to an all-time high of more than 384 billion dollars.  The previous high was 381 billion dollars which occurred back in July 2007.  Margin debt is about 29 percent higher than it was a year ago, and the S&P 500 has risen by more than 20 percent since last fall.  The stock market just continues to rise even though the underlying economic fundamentals continue to get worse.  So should we be alarmed?  Is the stock market bubble going to burst at some point?  Well, if history is any indication we are in big trouble.  In the past, whenever margin debt has gone over 2.25% of GDP the stock market has crashed.  That certainly does not mean that the market is going to crash this week, but it is a major red flag.

The funny thing is that the fact that investors are so highly leveraged is being seen as a positive thing by many in the financial world.  Some believe that a high level of margin debt is a sign that “investor confidence” is high and that the rally will continue.  The following is from a recent article in the Wall Street Journal…

The rising level of debt is seen as a measure of investor confidence, as investors are more willing to take out debt against investments when shares are rising and they have more value in their portfolios to borrow against. The latest rise has been fueled by low interest rates and a 15% year-to-date stock-market rally.

Others, however, consider the spike in margin debt to be a very ominous sign.  Margin debt has now risen to about 2.4 percent of GDP, and as the New York Times recently pointed out, whenever we have gotten this high before a market crash has always followed…

The first time in recent decades that total margin debt exceeded 2.25 percent of G.D.P. came at the end of 1999, amid the technology stock bubble. Margin debt fell after that bubble burst, but began to rise again during the housing boom — when anecdotal evidence said some investors were using their investments to secure loans that went for down payments on homes. That boom in margin loans also ended badly.

Posted below is a chart of the performance of the S&P 500 over the last several decades.  After looking at this chart, compare it to the margin debt charts that the New York Times recently published that you can findright here.  There is a very strong correlation between these charts.  You can find some more charts that directly compare the level of margin debt and the performance of the S&P 500 right here.  Every time margin debt has soared to a dramatic new high in the past, a stock market crash and a recession have always followed.  Will we escape a similar fate this time? 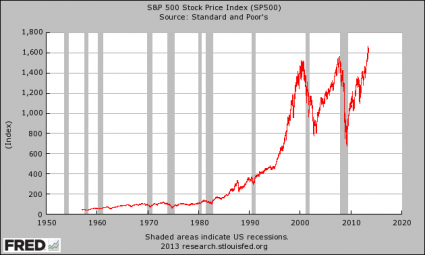 What makes all of this even more alarming is the fact that a number of things that we have not seen happen in the U.S. economy since 2009 are starting to happen again.  For much more on this, please see my previous article entitled “12 Clear Signals That The U.S. Economy Is About To Really Slow Down“.

At some point the stock market will catch up with the economy.  When that happens, it will probably happen very rapidly and a lot of people will lose a lot of money.

And there are certainly a lot of prominent voices out there that are warning about what is coming.  For example, the following is what renowned investor Alan M. Newman had to say about the current state of the market earlier this year…

“If anything has changed yet in 2013, we certainly do not see it. Despite the early post-fiscal cliff rally, this is the same beast we rode to the 2007 highs for the Dow Industrials. The U.S. stock market is over leveraged, overpriced and has been commandeered by mechanical forces to such an extent that all holding periods are now affected by more risk than at any time in history.”

Forbes: “Why Stocks Are On Solid Footing And This Is No Bubble“

Yahoo: “This Is NOT a Stock Bubble! Says Ben Stein“

MarketWatch: “Is a stock bubble coming? No, say economists“

So what do you think?